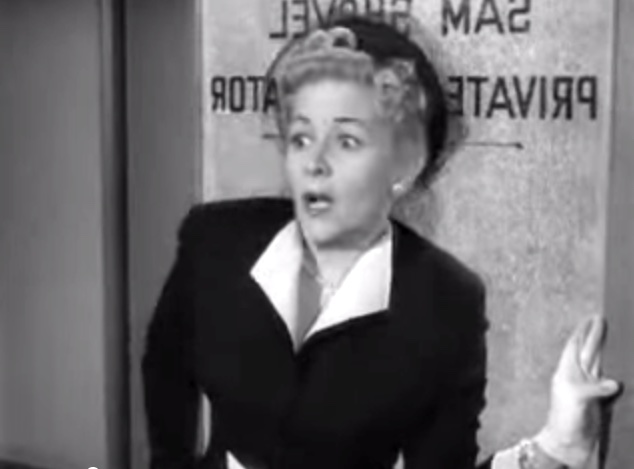 When at the end of their shift Shemp sits in the detective’s chair, and (in a very funny moment) a beautiful blond in trouble (played by Three Stooges regular Christine McIntyre) who needs the ‘detective’ to protect her. She’s in trouble, and before you know it, she’s been kidnapped, and the Three Stooges are on the case!

Despite their best efforts, they swiftly find the house where the kidnappers are hiding – and with typical bumbling, find their way in.

However, it turns out that the kidnapper is more that he seems. They are two escapees from a mental hospital, the assistant and the mad scientist (played to the hilt by Three Stooges regular Philip Van Zandt) are trying to perfect a robot, and decides that they need a human head to transplant onto the robot’s body … after a brief moment where the mad scientist considers his assistant, Ralph, (“But I haven’t any brains!  You told me so!”)

The Stooges arrive, and Moe wants to meet the scientist first – after all, he’s the brains of the operation!

After a close shave with a head-chopping device, the chase is on, with the boys trying to both escape and rescue the girl.  Several hilarious moments ensue, include a Looney Tunes moment when the assistant enters a room, looking for them, and Larry is disguised as a lamp, with a lampshade on his head and a light bulb in his hand …. Which turns on when the assistant pulls the bulb’s string!  A short, very funny moment, and Dopey Dicks is filled with moments like this.

All ends well, as the Three Stooges and Christine make their getaway … with the headless robot driving the car.

A very funny Three Stooges short film, and recommended.  I rate it 4 clowns out of 5.  Dopey Dicks is available as part of the Three Stooges DVD collection volume 6

Ralph (Stanley Price): [Larry and Shemp attempt to leave the mansion] Don’t go away, gentlemen, we may need all of you! Hahahahahahaha!
Shemp, Larry: Hehehehehehehe!
[Larry and Shemp both get spooked]
Shemp (Shemp Howard): I don’t like the looks of that guy!
Larry (Larry Fine): Me neither!

Mad Scientist (Philip Van Zandt): Your brain for science …
Ralph: But I haven’t any brains!  You told me so yourself!

Ralph: (introducing Moe) This is the best of the lot, Professor, which isn’t saying much.
Moe (Moe Howard): Thank you!