Introduction to the Three Stooges

The history and background of all six of the Three Stooges.

Moe Howard biography – the “boss” stooge of the Three Stooges, and the driving force behind the team.

Biography of Larry Fine. Literally, the Stooge in the middle. In a real sense, the glue that held the act together.

Biography of Curly Howard. The most zany, and most popular, of the third stooges in the act.

Shemp Howard biography – the only one of the Stooges to have a successful career outside of the group.

Joe Besser biography – the least liked of the third Stooges.

Curly Joe DeRita biography. The final “official” Stooge, who replaced Joe Besser in the group, and went on to co-star in the feature films.

Christine McIntyre – the very versatile actress with a lovely singing voice. She could play villain, hero, girl next door, or nearly anything else.

Vernon Dent was the long-time co-star, customarily playing the authority figure. In real life, a close friend of Shemp’s as well.

Philip Van Zandt was a frequent antagonist to the Stooges

Nanette Bordeaux had many appearances with the Stooges, either friend or antagonist, with a French accent. 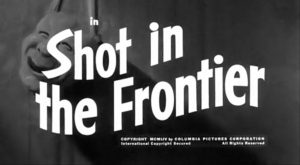 Trending
Shot in the Frontier