Snow White and the Three Stooges 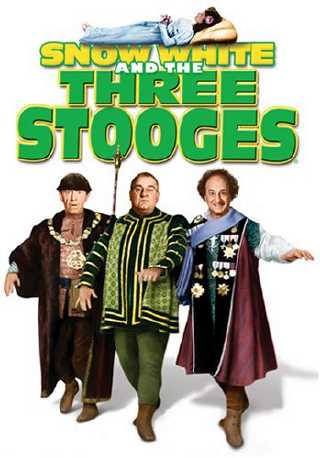 Editorial Review of Snow White and the Three Stooges, courtesy of Amazon.com

Many Stooges fans will find Snow White and the Three Stooges painful going, while some might find it quite charming. The film was conceived as a vehicle for Carol Heiss, the 1960 Olympic figure skating champion, but it was obvious that her limited acting would not carry the classic plot very far. So the Three Stooges were substituted for the Seven Dwarfs, and Prince Charming (Edson Stroll) became their companion. The start and end of the film follow the Disney version fairly closely, with Patricia Medina providing the only real acting as the Wicked Queen, abetted by the reliable villainy of Guy Rolfe.

In fact, Snow White lost in the woods is almost a frame-by-frame copy of the Disney sequence, complete with a live tree out of the 1939 Wizard of Oz. This might grab some youngstersâ attention by frightening them and some by amusing them, but the love sequences and the forgettable songs might bore them. The fight sequences are possibly too grisly for some children; Guy Rolfe dies by falling into a vat of boiling oil.

As a Three Stooges vehicle, it differs from their other films. Except for Curly Joe’s spoonerisms, there is little humor in the dialogue, a bare minimum of slaps (without the reassuring comic sounds), and no eye pokes. (Moe was sensitive to parental complaints about their television shorts.) There is, however, a touching moment when they are mourning the supposed death of Snow White. And you do get to see them in color. —Frank Behren

Trivia about Snow White and the Three Stooges: