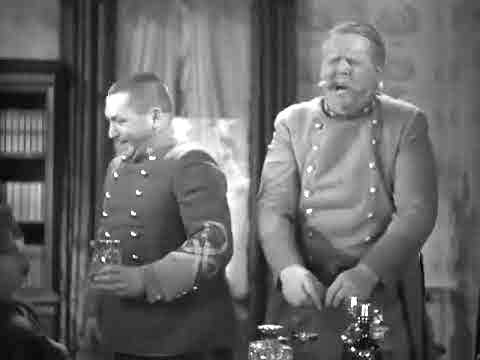 Biography of Bud Jamison (1894-1944), frequent co-star with the Three Stooges

Bud Jamison (February 15, 1894 – September 30, 1944) was an American comedy film actor. He appeared in 450 films between 1915 and 1944.  Bud appeared in films with many of the comedy giants of the 20th Century (Charlie Chaplin, Stan Laurel, Harold Lloyd). He is best remembered for his appearances in the Three Stooges short films.

Born in Vallejo, California in 1894, Bud Jamison was one a stage and vaudeville performers who made movies in California. His husky build and willingness to participate in messy slapstick and rowdy action guaranteed him work in silent comedies. In 1915, he was a member of Charlie Chaplin’s stock company at the Essanay studio. From there he moved to the Hal Roach studio. There he played hot-tempered comic foils for Harold Lloyd, Snub Pollard. and Stan Laurel. In the 1920’s he joined Universal Pictures’ short-comedy contingent, and later worked in Mack Sennett comedies.

In his earliest films, Bud Jamison looked too young to be totally convincing in heavy makeup as a veteran policeman, detective, or authority figure. As time went on, however, he grew into these roles. By the time sound movies arrived he was well established as a reliable character comedian. In 1921, he married Georgia Kathleen Holland, and they remained married through the rest of his life.

Bud Jamison had a beautiful singing voice, and loved to sing off-screen. Talking pictures gave producers a chance to use his singing ability. For the rest of his career he would occasionally sing in films. A brief series of color travelogues, filmed in 1930, featured Bud Jamison and comic Jimmie Adams as “The Rolling Stones”. They were two singing vagabonds seeing the country. Bud Jamison was even hired just for his singing, as in Pot o’ Gold. There he plays a vagrant who harmonizes in jail. He also sang “You’ll Never Know Just What Tears Are” in The Three Stooges short film, A Ducking They Did Go.

For the most part Bud Jamison continued to play cops, robbers, bosses, servants, and various professional men who clash with comedy stars. He appeared opposite Bing Crosby, W. C. Fields, and Andy Clyde in Mack Sennett’s talking films. Like other members of the two-reel-comedy community, he found work at various studios. These included

Bud Jamison is famous for his Columbia Three Stooge short films. Including their very first, Woman Haters. In this film, Bud Jamison speaks in verse, as the head of the Woman Haters Club. As does everyone else in the film.

Bud Jamison suffered from diabetes during his later years, as did his frequent co-star Vernon Dent. He became ill in mid-1944, but as a devout Christian Scientist, he refused to take any insulin.  As a result, he went into diabetic shock and died on September 30, 1944, at age 50. He is interred in Inglewood Park Cemetery, Inglewood California.