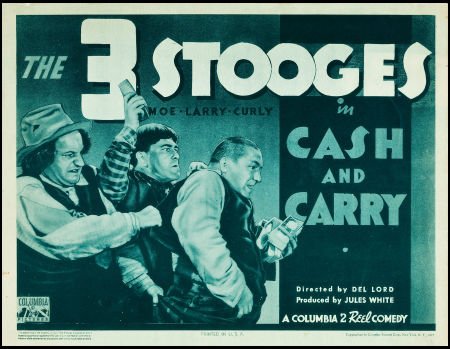 I have had a warm feeling for Cash and Carry since I first saw it many years ago.  Not only are the Three Stooges very funny as normal, but they also tug on the heart strings, trying to raise money to help a crippled boy have an operation so that he can walk normally.  It shows the Stooges at their best, as well as their funniest.

Cash and Carry begins with Moe, Larry and Curly returning from the hills as unsuccessful prospectors, driving a broken-down car that’s a dead ringer for the Clampett’s car from The Beverly Hillbillies.  Returning to “home sweet home” (the city dump), they find that squatters have moved into their shack – a young woman and her crippled brother.  After initially threatening to throw them out, upon learning that the boy is crippled, the Stooges have a change of heart, and after a funny misunderstanding in the city dump, they decide to invest the kids’ savings in the bank.

While at the bank, the Three Stooges are spied by a pair of con men, who sell them the map to where Captain Kidd’s buried treasure — marked “Walla Walla.” Soon the Stooges are busy using their prospecting equipment to dig through the “walla” marked by an X — and, after some very funny slapstick, break into the building next door — the U. S. mint! The film ends with Moe, Larry and Curly (along with Jimmy and his sister) explaining to President Franklin Roosevelt what happened, and the short film has a happy (and patriotic) ending for all involved.

Moe (Moe Howard): What’s the idea of movin’ into our apartment?
Larry (Larry Fine): Come on beat it.
Jimmie: I’m sorry, Mister. Sis and I didn’t know anyone lived here so we just moved in but we’ll get out by the way.
Curly (Curly Howard): Hey, where’s your father?
Jimmie: We ain’t got no father. Just Sis and I.
Moe (Moe Howard): Wait a minute, son. We made a mistake, this ain’t our house, we didn’t have any curtains. Go on sit down and do your homework.
Jimmie: Oh, thank you.

Moe (Moe Howard): Why are you keeping your money layin’ around in cans for? Why don’t you put it in a bank?
Jimmie: Will a bank give it back to us?
Curly (Curly Howard): Oh, sure! They didn’t use to, but now they do!
Larry (Larry Fine): And when you take it out they give you some more! I had a dollar once …
Moe (Moe Howard): That’s enough.

Con-Man: Pardon me, gentlemen, how would you like to get in on our deal where you can make thousands?
Curly (Curly Howard): That ain’t enough, we gotta make five hundred dollars!

Moe (Moe Howard): What’s the matter with you, you want to blow us all up? [hits Curly with the sticks of dynamite]

Moe (Moe Howard): The treasure, we found it!
Larry (Larry Fine): Now Jimmy can get his operation!
Curly (Curly Howard): There’s enough here for all of us to have an operation!

Trivia for Cash and Carry

2 thoughts on “Cash and Carry, starring the Three Stooges”