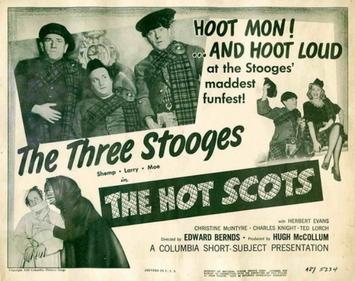 In The Hot Scots, the Three Stooges guard a Scottish castle … Can they find the crooks who’ve been robbing the Earl? Who are the spooks?

But, luck intervenes, and they have a chance to prove their worth as detectives. They go to protect the prized possessions of The Earl of Glenheather Castle (Herbert Evans). Dressed in kilts and talking in phony Scottish accents, the Stooges (as McMoe, McLarry, and McShemp) are on the case … Trying to find out who’s been robbing the Earl blind. Could it be the butler (Theodore Lorch)? The secretary (Christine McIntyre)? And who’s dressing up as spooks to scare the Stooges away?

Moe: All right, take it easy son, I just wanted to ask you a question. What would you rather have? a shoe full of dollar bills, or two socks of fives?
Shemp: I’ll take the two socks!
Moe: You got em!

The Earl of Glenheather (Herbert Evans): Say, what part of Scotland are you from?
Moe: He’s from southern Scotland, below the McMason McDixon Line.

Larry: And what might your name be, lass?
Lorna Doone (Christine McIntyre): Perhaps you’ve heard it, ’tis Lorna Doone
Shemp: Hi Lorna, how ya doin’?

Shemp: I oughta take something for my nerves.
Moe: Like what?
Shemp: A trip home.

Shemp: [Gets in the bed next to Angus – he thinks Larry is still in the bed] Move over!… Look what you did to the covers!…

[Angus tries to get Shemp’s attention by pulling bedspread over. Shemp reaches for it and touches teeth on Angus’ mask]

[Lorna having been caught trying to escape with the stolen goods]
Shemp: So that’s what you’ve been Doone, Lorna.

Trivia for The Hot Scots