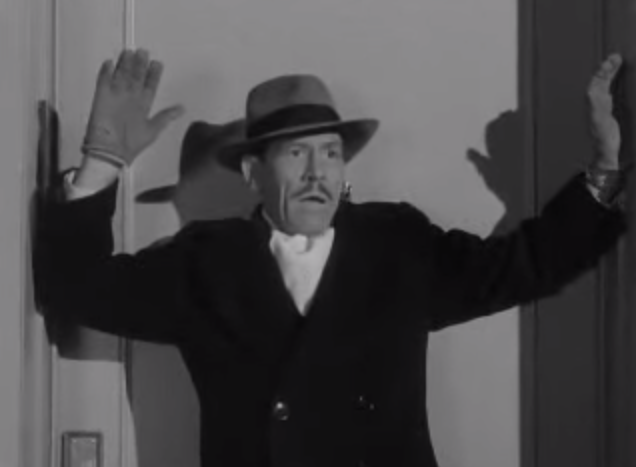 Kenneth MacDonald (born Kenneth Dollins, September 8, 1901 – May 5, 1972) was an American film actor. Born in Portland, Indiana, Kenneth MacDonald made more than 220 film and television appearances between 1931 and 1970.

Kenneth MacDonald began his career as a stage actor, and came to Hollywood in the early 1930. He found a few bit parts at first, finally finding steady work in westerns and serials at Columbia Pictures. Kenneth MacDonald perfected a cool, debonair demeanor, which usually masked an evil side as a con man, outlaw, or thief. His speaking voice was rich and well modulated, often being gentle and ominous at the same time, in the Boris Karloff manner. Actors in Columbia’s stock company almost always worked in the studio’s two-reel comedy shorts as well as features and serials, but Kenneth MacDonald did not join the short-subject fraternity until 1945, when he appeared opposite comedy stars Gus Schilling and Richard Lane. He is probably best known today for his work with The Three Stooges.

Kenneth MacDonald developed a flair for comedy, and he made memorable appearances in Stooge comedies including Monkey Businessmen, Hold That Lion!, Crime on Their Hands, Punchy Cowpunchers, and Loose Loot. Beginning in 1953, the comedy in the Columbia shorts became even more physical under producer-director Jules White, and MacDonald obligingly got plastered with pies, fruit, and other missiles. He also returned to Columbia’s serial unit, which was then filming low-budget remakes of his older serials using much of the original footage; MacDonald appeared in new scenes to match his old ones. He left the Columbia shorts department in 1955.

Kenneth MacDonald was a frequent guest star from 1951 to 1953, mostly as a sheriff, in the syndicate television series, The Range Rider, with Jock Mahoney and Dick Jones. He had a recurring role as Judge Carter on CBS’s Perry Mason between 1957 and 1966. He appeared six times as Colonel Parker in the ABC western series Colt .45. MacDonald still appeared occasionally in motion pictures, including a bit role as Jerry Lewis‘s father in the 1961 feature, The Ladies’ Man, and as a member of the court martial board in The Caine Mutiny (1954).

Kenneth MacDonald died of a brain tumor in Woodland Hills, California on May 5, 1972.