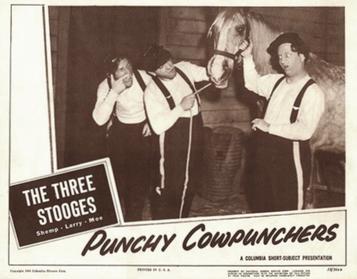 In short, Punchy Cowpunchers is one of the funniest Three Stooges short films of the Shemp era.  In fact, it’s one of their funniest shorts, period.  The comedy is fast and furious, giving a lot of opportunity for the supporting cast to shine.  Christine McIntyre & Jock Mahoney nearly steal the show, in fact.

One thing that I appreciate was just how acrobatic Jock Mahoney was in his slapstick.  And Christine, as the “poor, helpless woman” who keeps knocking the Dillon gang out cold with a single punch is hilarious! Especially with the “fainting spell” afterwards.

One other thing is the raw number of Three Stooges regulars who show up in Punchy Cowpunchers — even for a brief appearance.  Dick Wessel is their sergeant, whom the boys accidentally abuse. Emil Sitka is the captain, who Dick accidentally abuses.  Vernon Dent is the colonel who can’t send the cavalry to help.  After all, it’s payday, and “boys will be boys”.  And of course, Kenneth MacDonald as the villainous Dillon.

Everyone is funny, the comedy’s fast paced, with lots of little “bits” thrown in.  One quick example is the gang member who’s trying to open a safe.  Rather than scratching his fingers on a piece of sandpaper, he uses his unshaven face!  It’s fast, furious, funny, and highly recommended! Enjoy!

Shemp (Shemp Howard): [at a bar, trying to look tough]  I’ll have a milkshake … with sour milk!

Elmer [Jock Mahoney]: You’re right, pardner.  I’m hitting the trail. [He exits, followed by the sound of cans falling, etc.]
Moe (Moe Howard): It sounds like the trail hit him!

Nell [Christine McIntyre]: [to the gang member trying to kidnap her] No! I’m just a poor, weak woman! [knocks him out with a single punch]

Nell [Christine McIntyre]: [to Elmer] Now we can get married!
Elmer [Jock Mahoney]: Now wait a minute, Nell.  Us Westerners aint the marrying kind.  We just go riding off into the sunset. [He walks away, strumming his guitar and singing … as a vase flies from behind and hits him in the head] Nell honey!