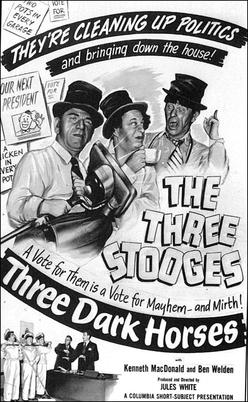 In Three Dark Horses, the Three Stooges get into the political ring as crooked Kenneth MacDonald hires them to cast the winning votes.  But Moe, Larry, and Shemp are too crooked to stay bought!

In the first half of Three Dark Horses, Moe Howard, Larry Fine, and Shemp Howard are inept janitors.  They’re cleaning the campaign office of Hammond Egger, where two crooked politicians scheme to put him in office.  So they can line their own pockets, of course.  Moe, Larry, and Shemp make their standard slapstick disaster, including vacuuming up the toupee of one of the crooks.  It’s a very funny scene, as they “fix” their problem.  You almost feel sorry for the crook …

The other crook, played by Kenneth MacDonald, has an idea.  These three are dumb enough to be bought, and vote for their crooked candidate as delegates!  And so begins the second half of the short.  The Stooges return to their hotel room after a hard day of campaigning.  But, they’ve found out how crooked Egger is, and plan to vote for his opponent.  So, after Shemp soaks his “aching dogs” in a cute scene, Moe practises his campaign speech.  And after waking his two friends, they eat before they leave to vote.

Except that a parrot has walked into their cooked turkey, and they do the “it’s alive” bit until it’s time to leave.  They do so, betray the two crooks, and return to their hotel room.  Where the crooks are waiting.  After a short slapstick fight, the Stooges are victorious, and … drown the men in a bathtub.  Seriously.