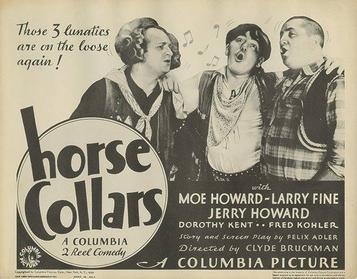 Moe, Larry, the cheese!  In this Three Stooges short film, Curly goes wild whenever he sees a mouse, and the only thing that calms him down is Moe or Larry feeding him cheese.  Set in the American Old West, the Three Stooges are inept detectives, hired by a young lady to retrieve an IOU from the movie’s villain, Double Deal Decker (do you get the idea that he cheats at cards)?

When the Three Stooges try to steal Decker’s wallet (where they think the IOU is hidden), they are soon caught, and are being hung for their crime, where Curly sees a mouse, leading to a scene where Curly is wildly attacking everyone in sight, crying out “Moe! Larry! the cheese!” while Moe and Larry are dangling from their nooses — thankfully, they get down in time to prevent being hung, and even feed Curly his cheese.

Later on, the Three Stooges try to break into Decker’s safe, again leading to a very funny fight scene with Decker and Curly sharing a coat while Curly beats up all of Decker’s men, Decker, and Moe and Larry as well!  All ends well, as Moe and Larry feed Curly some Limburger cheese – and Curly’s foul breath knocks them all out.

Highlights of the film include the ‘tin roof’ joke when the Three Stooges order a drink at Decker’s bar, shooting a coin in the air and receiving change, a funny dance scene, and the ‘accordion’ music playing when they’re caught with Decker’s wallet.  A very funny western Three Stooges short film, which I hope you enjoy as much as I did.

Bartender (Nelson McDowell): What about the money?

Curly (Curly Howard): A tin roof… it’s on the house.

Larry (Larry Fine): Every time he sees a mouse he goes crazy.

Moe (Moe Howard): Cause his father was a rat.

Curly (Curly Howard): If you wuz alone I’d punch ya right in the nose!

Moe (Moe Howard): So why don’tcha do it?