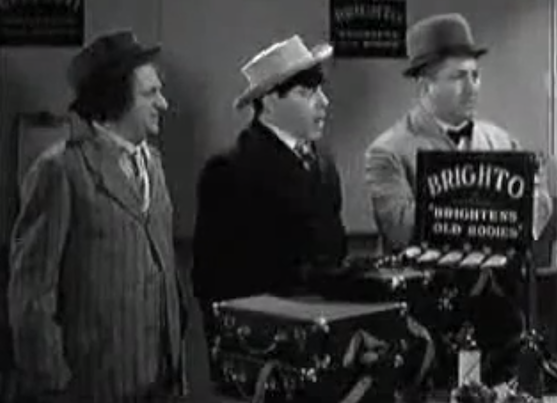 The Three Stooges (Moe Howard, Larry Fine, Curly Howard) are asleep in bed at noon until they’re awakened by their wives, who demand that they find jobs. The boys soon stumble on company president Dr. Bright (Frank Mills), who is in desperate need of salesmen for his new product called Brighto — “Brighto: makes old bodies new.” How desperate? Desperate enough to hire Moe, Larry and Curly, who think that Brighto is car polish.

The Stooges take to the streets where they eagerly (and ineptly) demonstrate Brighto for prospective customers, but application of the product damages a policeman’s (Bud Jamison) sleeve, destroys another man’s shoe, and ultimately removes the paint from a man’s (Vernon Dent) new car. The angry owner of the car joins with the policeman in hot pursuit of the Stooges, only to be unintentionally hit by pies during the chase, promising to get even if he ever sees them again!

On the run, the Stooges return to Dr. Bright’s office to complain that the polish is terrible. Dr. Bright admonishes the Stooges, telling them it is medicine, not polish. However, he foolishly agrees to give them a second chance as salesmen. Knocking over the doctor’s displays for a second time, the boys work their way into Los Arms Hospital and try to sell Brighto to the patients.

Eventually, they enter the office of the superintendent — Dr. Harry Arms —  to try to make a sale, only to find out that it’s Vernon Dent whose car they damaged before they pied him — and the chase is on! The Stooges try to escape into an elevator, but Vernon Dent is inside, so the Stooges close the door on him and send him to the top floor by turning the elevator arrow. The boys then make a hasty exit by riding a hospital gurney into the street, where they use a blanket as a sail. After causing an auto accident, they run home, jump through a window into their bed, and go back to sleep.

Curly: Hey, what’s this stuff for anyway?
Larry: Why it’s a cleaner, you chump.
Curly: I know. It’s auto polish.
Moe: You boys really want to know what it’s for?
Curly, Larry: Yeah!
Moe: It’s for sale. Now get busy selling it.

Moe: [while “polishing” a man’s shoe with Brighto] Remember sir, Brighto! You’ll never forget it as long as you live!
[removes the rag to realize that the Brighto has eaten right through the man’s shoe] And neither will I!

Curly: Medicine! Oh! [drinks from the bottle] Ahh, I feel better already!
Moe: What was wrong with you?
Curly: Nuthin’!

Curly: Hello Ma, hello Pa. It wasn’t much of a fight. I stood like that … but not for long!

Moe: Just as I thought!  Give him a ticket!
Larry: One way or round trip?
Moe: Make it a one-way round trip.

Curly: A guy wants to know what to do for inflammation.
Moe: Why ask us? Tell him to dial Inflammation!