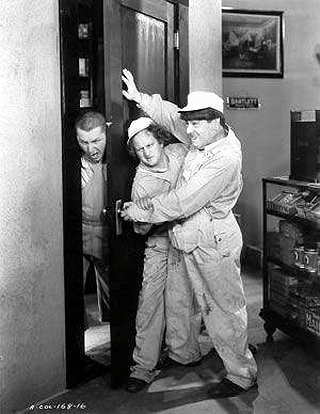 Pardon My Scotch is set in America as the Prohibition on the sale of alcohol is about to expire.  Moe, Larry, and Curly are working as carpenters, installing a new door at a pharmacy.  The first half of the short takes place in the pharmacy, and is the funnier half of the short film, in my opinion.  There’s ample opportunity for slapstick and the Stooges use it well. One of my favorite bits that the Three Stooges perform is the “point to the right” which they do here.

In addition, Curly cuts a table in half while Moe is standing on it. In reality, Moe Howard actually broke his ribs filming this! He traps Moe under a door, and uses a power saw to “cut him free” …. Resulting in dropping him through the floor to the floor below.  The pharmacist needs to leave since his ordered shipment of alcohol won’t arrive on time, and he foolishly leaves the Stooges in charge.

While he’s gone, the salesman from the liquor company arrives, tasked with placating the customer. And he asks the Stooges to mix him a “pick up” drink.  One of the Stooges patented routines is creating a concoction of chemicals, not having a clue what they’re doing, and they do it very well here.  The final concoction tastes like Scotch. And the salesman arranges to have Moe, Larry and Curly come to his boss’ mansion and demonstrate their “scotch”.

Scots at the party

The second half of the short film takes place at the mansion, where the Stooges are dressed in kilts and are pretending to be Scots.  They do their normal mayhem, including throwing fruit in the open mouth of an Italian singer (played by Billy Gilbert), doing a parody of a Scottish dance, disrupting the dinner, and finally rolling in a keg of their brew — which explodes shortly afterward.

Salesman: Boy, do I feel low.  Hey, mix me a pick-up.
Curly (Curly Howard): He wants a derrick!

Moe (Moe Howard): Sneak up on it slow.
Curly (Curly Howard): I’ll be right behind you, don’t be afraid.

Moe (Moe Howard): This oughta pick him up!
Curly (Curly Howard): And put him down, too.

Larry (Larry Fine): Maybe we oughta humor him.
Curly (Curly Howard): I’ll marry him if there’s enough dough in it.

Scotsman: Are you laddies by any chance from Loch Lomond?
Curly (Curly Howard): No, we’re from Lock Jaw.

Hostess: The gentlemen are going to do their native dance.
Curly (Curly Howard): I ain’t gonna take my clothes off for anybody.

Hostess: We would like to have you do the Highland Fling.
Moe (Moe Howard): We ain’t much on the Highland Fling, Lady, but sure knock ’em dead with our Lowland Shin.
Hostess: A lowland shin?
Curly (Curly Howard): Yeah, it’s the same as a fan dance, only ya do it in kilts!
Larry (Larry Fine): [to bagpipers] Lay on, MacDuff.

Trivia about the Three Stooges short film, Pardon My Scotch