Home » Posts » We Want Our Mummy, starring the Three Stooges

We Want Our Mummy, starring the Three Stooges 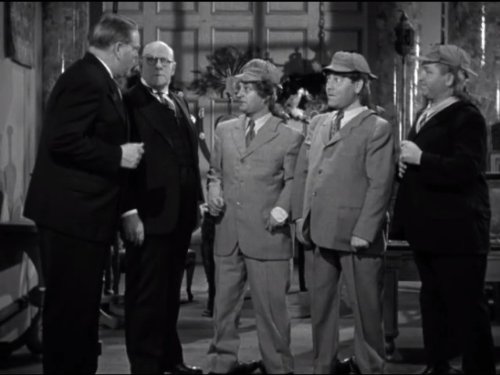 We Want Our Mummy is a classic Three Stooges short film in every sense of the word.  It contains classic slapstick comedy, great verbal humor, and wonderful interaction between Moe, Larry, and Curly.  In a nutshell, the Three Stooges are detectives hired to find a missing professor … And unintentionally help the criminal move the professor out of the building

Never letting the impossible slow them down, the boys hop a taxi (!) and drive to Egypt.

After some clowning around in the desert, they accidentally find the tomb.  After some frantic racing around the “haunted” tomb, Moe and Larry are caught … By some very human criminals.  Moe and Larry escape, while Curly thinks that he’s found the mummy of Rootentooten.  Who’s soon chasing the reunited Stooges.  They’re soon chased into the burial chamber, and after some slapstick they think that Curly’s destroyed the valuable remains of Rutentooten.  The criminals are inside the tomb as well, and so Curly impersonates the mummy.  With luck, they rescue the professor and the real mummy.  After a short encounter with a crocodile, they run out of the tomb and back to their waiting taxi.

We Want Our Mummy is a very funny Three Stooges short film, fast-paced and funny, with both slapstick and verbal humor – I enjoyed it very much, and hope that you do as well.

Also, there’s a lot of verbal humor – check it out in Funny Movie Quotes from We Want Our Mummy.

Trivia for We Want Our Mummy