Home » Posts » Have Rocket Will Travel

Have Rocket Will Travel 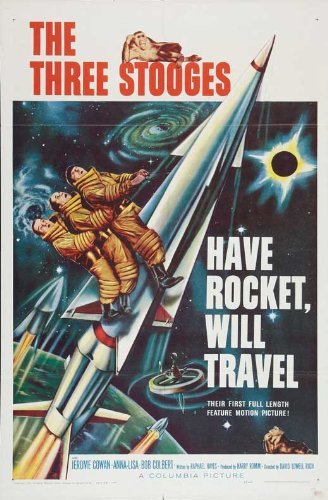 Synopsis of Have Rocket Will Travel

The Three Stooges (Moe, Larry, Curly Joe) are janitors working at a space center who accidentally blast off to Venus. They encounter a talking unicorn, a giant fire-breathing tarantula, and an alien computer.   Which has destroyed all human life on the planet and creates three robotic twins of the Stooges. When the boys return home triumphant, they are given a hero’s welcome at a society ball, which they promptly demolish.

Movie review of Have Rocket Will Travel

Have Rocket, Will Travel is somewhat of a mixed bag among the Three Stooges feature films.  On the one side, it includes some of the classic moments from their short films. It also retains some of the “feel” of those shorter films. It also has a sympathetic figure in a female scientist whom the boys need to help.  On the negative side, it’s off to a slow start, and the pace seems slower than it should be.  But when you consider that it’s their first full-length film, and that the Stooges were in their 60’s, it’s certainly understandable.

The movie begins with the Three Stooges (Moe Howard, Larry Fine, Curly Joe DeRita) working as janitors at a space center.  They make friends with a female scientist, played by the lovely Norwegian-born Anna-Lisa.  She encourages Moe to maintain his interest in science.  It turns out that her father was a janitor, who scrimped and saved in order to send her to school.  “You could have been my father”.  This is a very sweet moment. Later on when her job is in trouble (because she has to create a more powerful rocket fuel in a short period of time), the Three Stooges decide to help.  As Curly Joe says, “We can’t let them do that somebody who could have been our daughter!“

So, the Three Stooges proceed to “improve” her formula for rocket fuel. With Larry’s inadvertently help (a funny scene – as Curly Joe and Moe are trying to find the ‘magic’ ingredient to improve the fuel (including popcorn), Larry is diligently working over a Bunsen burner. Only for the audience to realize that he’s making coffee!

The secret ingredient to the rocket fuel

Then he mistakenly adds sugar to the rocket fuel and drinks some, thinking it’s coffee, he starts coughing fire and doing back flips.   With the ‘secret ingredient’ discovered, they make a large batch of the fuel that evening. They next use a fire truck start pumping it to the rocket.  Unfortunately, their boss is woken by the noise and investigates.  As Moe and Larry do a funny routine with trying to retrieve a dropped key from a drain. Which leads to Curly Joe damaging the water pipes in the basement.  This leads to the Stooges doing their classic ‘wrapping themselves in a maze of pipes’ routine.

Their boss shows up and walks into the basement.  Which the boys have now flooded, and they all get washed out into the street.  The Three Stooges run off to the rocket, with their boss in close pursuit.  A dropped match sets fire to the hose which acts like a lit fuse.  It ignites the rocket, and launchs the boys into space.

Their trip to Venus is eventful, and funny, as they fight with zero gravity, and try to communicate with Earth.  Which works, until Larry accidentally swallows a vacuum tube, and the Three Stooges do their well-known ‘operation’ to retrieve it.  They manage to land safely on Venus, which looks remarkably like Earth, complete with a breathable atmosphere.  Of course, the giant fire-breathing tarantula that chases them isn’t so familiar, nor is the talking unicorn that they rescue.

The unicorn, who speaks in Olde English, directs them to the “highest life form” on the planet – a computer that has eradicated the humans on the planet, and decides to use the Three Stooges as templates to make robotic copies of, so it won’t be lonely.  This leads to an extended chase scene in a corridor with six doors, but eventually, the Three Stooges escape.  With their unicorn friend, they return to Earth, where they are celebrated as heroes.

Once there, they are feted at a high society bash, which is a funny scene.  I was expecting it to end in a pie fight.  But I was surprised to see it turn into a slap fight.  It’s a funny ending, but there’s a final scene with the Three Stooges flying through space singing the lyrics to the theme song.  And with Larry and Curly Joe repaying Moe for his slapstick with a dual pie to the face.

Funny movie quotes from Have Rocket, Will Travel

Mr Morse (Jerome Cowan): The board doesn’t approve of this mixing of scientists with … people.

[upon meeting a talking unicorn]

Larry (Larry Fine): [after a beautiful French girl walks away] Why didn’t I learn French instead of Latin? [spies Hispanic girl] Oh, a Latin!

Trivia for Have Rocket Will Travel starring the Three Stooges

2 thoughts on “Have Rocket Will Travel”