The Three Stooges in Orbit 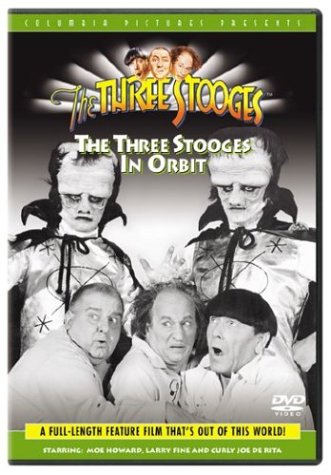 Editorial Review of The Three Stooges in Orbit, courtesy of Amazon.com

The Three Stooges in Orbit has the team playing not only themselves but themselves trying to make it big on a television show. Since they keep breaking leases by cooking in their apartments, they rent a room in a spooky castle that houses not only a wacky professor (played by “the fourth Stooge,” Emil Sitka, veteran of many a Stooge short) and his pretty daughter, but a pair of Martians who are waiting for him to perfect his latest invention and use it to conquer the Earth.

After an old situation-device in which the craft is too large to leave the workroom, the Stooges make a trip into space that adds nothing to the plot, and finally defeat the invaders by hoisting them on their own petard. The usual chase routine is replaced here by a fairly well done sequence in which the team is outside the craft trying to thwart the two Martians locked inside the craft, while a death ray is wiping out most of California. (The use of stock footage from other monster-invasion films is unintentionally hilarious.)

The love interest, deemed so necessary in films aimed at young audiences, is brief and tinged with mild comedy. The Martian make-up is obviously based on the original Frankenstein head shape, and it is a relief to hear them speak in some babble other than English as subtitles “translate” for us. In fact, the cleverest bit in this film is Moe’s reading a subtitle to learn of the proposed destruction of this planet — a gag worthy of Mel Brooks. The film reveals its age when the chief Martian bangs his boot on the table in the manner of Khrushchev and his shoe at the United Nations. But the only real weaknesses are Curly Joe’s fright reactions, so much funnier when done by Curly or Shemp in the past. —Frank Behrens

Funny Movie Quotes from The Three Stooges in Orbit:

Moe (Moe Howard): I can’t tell from the meter if the tank is half full or half empty.

Moe (Moe Howard): The visibility is zero
Larry (Larry Fine): Yeah, and we can’t see either!

Professor Danforth (Emil Sitka): The butler will show you to your tombs – er – rooms, gentlemen!

Trivia about The Three Stooges in Orbit: