Home » Posts » Time Out for Rhythm

Time Out for Rhythm 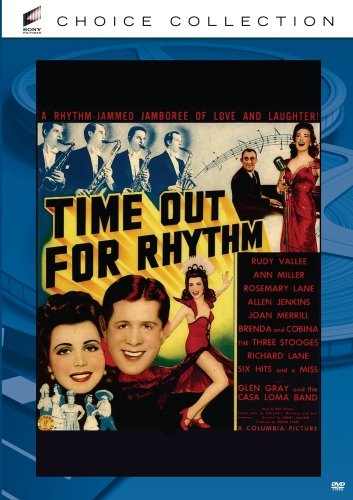 Synopsis of Time Out for Rhythm

Time Out for Rhythm is a musical dealing with Danny Collins (Rudy Vallee) and Mike Armstrong (Richard Lane), who form a successful partnership and preeminent talent agency, whose friendship and partnership are broken up over Mike’s love for a singer, Frances Lewis (Rosemary Lane), who is using Mike to climb the ladder to stardom.  Comic relief is provided early and often by the Three Stooges (Moe Howard, Larry Fine and Curly Howard)

Review of Time Out for Rhythm

Time Out for Rhythm is a somewhat unusual musical, it that it has a fairly “heavy” plot, where Mike has a crush on Frances Lewis, a former Broadway singer who has just divorced her first husband.  As the movie progresses, it becomes clear that she’s simply a gold-digger; while allowing Mike to think that she loves him, she’s dating a tobacco millionaire on the side.  As the millionaire departs after their date, she sighs “There goes 30 million dollars.”

Danny, and his assistant Off-Beat Davis (Allen Jenkins) both become privy to her intentions, and are trying to protect Mike, unsuccessfully.  Along the way, they discover that Frances’ maid, Kitty Brown (Ann Miller), is an accomplished dancer, and they recruit her for their latest production, leading to a romance between Danny and Kitty.  Mike’s romance with Frances leads to the shattering of the friendship and partnership, until a chance to audition for Hollywood forces them back together, and gives Frances a chance to stab Mike in the back one last time.

As I say, a very heavy plot line for a 1940’s musical, so it’s good that the Three Stooges are on hand as would-be actors who keep auditioning for the talent agents, as recurring comedy relief.  They’re very good in this role, and pop up with over a half-dozen routines, including their first filmed version of the “Maha, Yaha?” routine, and frankly it’s the funniest version that I’ve ever seen.  Likewise, later they play-act at being gangsters, do a very funny “I won’t pay the mortgage” routine that I frankly don’t remember seeing in any of their other films, a very funny “telegram delivery” routine ending with Curly shredding the telegram that they’re supposed to deliver in order to throw the scraps as though they were snowflakes, and in the big finale the Three Stooges dance the Rhumba, with Curly imitating Carmen Miranda!

In addition to the Three Stooges being laugh-out-loud funny (and they are), there’s also the dancing of Ann Miller, and some fairly nice songs as well:

All in all, even though I originally only watched Time Out for Rhythm for completeness as part of the Three Stooges section of this site, I ended up enjoying it very much, and I hope that you do as well when you have an opportunity to watch it; at present, itâs unfortunately not available on DVD.

Funny movie quotes from Time Out for Rhythm

Moe (Moe Howard): At this time the Rajah says he will throw the razor-edged daggers at random.
Larry (Larry Fine): Are you Random?

Mike: I’ll give you one second to get out of here!
Moe (Moe Howard): [manhandling Curly] Get going! You heard him! [looks at Mike, dashes out] I heard him, too!

Off-Beat Davis: [sending them to join the Army] How would you like to join the biggest act in town?
Three Stooges: Oh boy!
Off-Beat Davis: 52 consecutive weeks without a layoff! They even supply the costumes!
Moe (Moe Howard): Where?
Off-Beat Davis: Bartlett building, number 248, local draft board.
Larry (Larry Fine): Let’s hurry up before somebody beats us to it!

Danny Collins: Any calls?
Secretary 1: Three salespeople, the March of Dimes, and a wrong number.

Secretary 2: Is it possible?
Curly (Curly Howard): If you’re possible, we are too!

Secretary 1: I never forget a face!
Moe (Moe Howard): Well, you better go home, sister, because you forgot it today!

Curly (Curly Howard): Let’s rush home and pack! [the Three Stooges dash out, and then dash back in] We’re packed!

Secretary 1: [ordering escorts from an escort service] Make mine tall, blond, and …
Secretary 2: [grabbing the phone] near-sighted! And make mine … mine!

Secretary 2: Doesn’t my hair look awful today?
Secretary 1: I told you not to hang it where the dog could get at it.