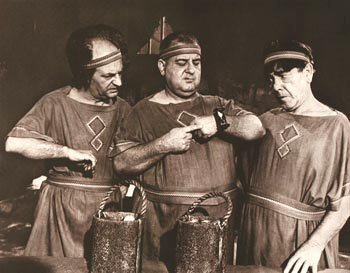 Curly Joe DeRita, born as Joseph Wardell, was the last of the Three Stooges. Curly Joe was born in Philadelphia on July 12, 1909 in a stage family, with his mother Florenze a dancer and his father Frank a stage technician.  He first performed on stage at the age of 7, with his mother and sister in a dancing act, “The DeRita Sisters and Junior”.  By 1921, Joe struck out on his own as a comedian on the vaudeville circuit.

Curly Joe – entertaining the troops in the USO

During World War II, Joe joined the USO, and entertained Allied troops in France and England, sharing the stage with such stars as Bing Crosby and Randolph Scott.   After the war ended, Joe returned to entertaining in America in burlesque (although avoiding risque material).  He also appeared on radio and television, with movie appearances as well.  Including making short films for Columbia Pictures, the same studio that produced the Three Stooges movie shorts.  Curly Joe was seen by Larry Fine while performing in Minsky’s Follies of 1958.  At the time, the Three Stooges were looking for a new “third Stooge” to replace the departing Joe Besser.  And Joe DeRita was offered the position.  Just as Columbia put an end to the making of short movies, the Three Stooges’ bread and butter.

In addition, he co-starred with Moe Howard and Larry Fine on their own cartoon show, with each episode starting and ending with a live action sequence. The character of Curly Joe was an interesting mixture.  Although heavy, his dancing background made him acrobatic, and he was very good natured and gentle, making him sympathetic to the audience. At this stage, the Stooges were visibly aging, and the slapstick became more subdued, although ever present.  And Curly Joe’s character fit into the trio like a glove.

Joe DeRita married Jean Sullivan in 1966, and continued to play Curly Joe until Larry Fine’s stroke forced the ending of the trio.   With Moe’s blessing, Curly Joe formed an act called The New Three Stooges with Mousie Garner and Frank Mitchell.  But the act only made a few appearances before disbanding.  Curly Joe DeRita, the last of the Three Stooges, died of pneumonia on July 3, 1993, at the Motion Picture Hospital in Los Angeles.