Moe Howard and the Three Stooges 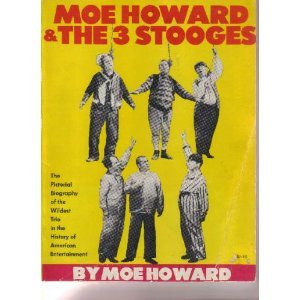 Moe Howard and the 3 Stooges, by Moe Howard

I truly enjoyed reading Moe Howard & The Three Stooges. It is a warm, loving story, told by Moe Howard himself, of his childhood, growing up with his brothers (two of whom we know as Curly and Shemp), of his early infatuation with acting, his youthful friendship with Ted Healy (who brought The Three Stooges together as a group), his struggles both personal and professional, and his final years.

Possibly the most amazing part of the book is how little anger the real Moe Howard expressed at people who had wronged him. For instance, Ted Healy was drunken, abusive, and tight-fisted – the worst that Moe expressed was, “It makes me sad now remembering how he turned on me it later years. I want to believe it was the liquor and that he didn’t realize what he was doing.” That is the nastiest thing that Moe Howard had to say about anyone or anything in the entire book.

Likewise, he realized how badly Columbia was lying to them about how poorly The Three Stooges shorts were doing, in order to justify never raising their salaries in the decades that they did short films for Columbia (in truth, they were massive profit centers for Columbia); but Moe has nothing nasty to say about either Columbia or the executives that they dealt with.

The book has warm memories of his brothers Curly and Shemp, and how devastated Moe was after each of their deaths, nearly ending the team each time. Likewise he has loving things to say about Larry Fine, as well as Joe Besser and Curly Joe De Rita, and their eventual forays into feature length movies. Interspersed throughout the book are photographs, both from their personal lives and from their many short films and feature length movies.

If I have anything negative to say about the book, itâs that it’s too short; I would have loved to hear more detail about the making of their movies, as well as more about Moe’s personal life.

In short, it’s a wonderful book, that any fan of The Three Stooges will walk away from with a smile. Highly recommended, and rated 4 clowns out of 5.