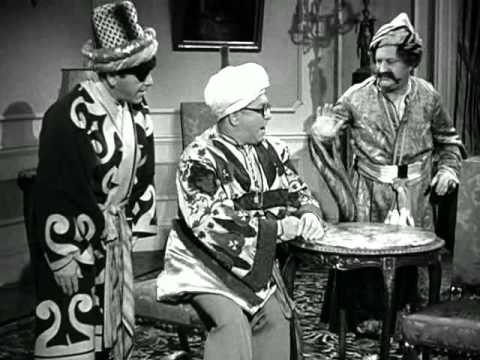 In Three Little Pirates, the Three Stooges (Moe, Larry and Curly) are castaways from a garbage scow who land on Dead Man’s Island, where the populace is stuck in the 17th century, ruled by the iron fist of the Governor (played by Stooge regular Vernon Dent).  With the help of island native Rita Yolanda (played by Stooge regular Christine McIntyre), Curly impersonates a Maharajah and gets permission to return to their own land (the Island of Coney) and return with presents.  In order to leave, though, the boys have to go through the pirate den of Black Louie, where Curly is forced into a knife-throwing contest with Larry as the target.  By blind luck (literally, as Curly is using the too-thick-to-see-through glasses), the Three Stooges win, and the short film ends with Moe declaring himself the ruler of the island.

Highlights of the short film include the famous “Maha? Yaha!” routine with Curly as the nearsighted Maharajah, a routine that they did in several short films after, as well as in many of their television appearances, as well as the pinball machine in the pirates’ den (yes, you read that right) – whenever it goes “TILT”, a large, cartoonish hammer pops out and hits the person in front of the machine, which Larry uses during the fight, as well as to silence “king” Moe at the end of the short film.  Three Little Pirates is available on the Three Stooges DVD collection The Three Stooges Collection, Vol. 5: 1946-1948.

Rita (Christine McIntyre) : She’d slit your throat for two doubloons.
Moe (Moe Howard): We’ve got a barber that’ll do it for two bits.
Curly (Curly Howard): But he ain’t as good lookin’!

Moe (Moe Howard): The raja says that in his domain on the islands of Coney & Long there are some fair chickadees who prowl through the meadows day & night.  If you give us till sunup, we shall bring some back by sundown.
Governor (Vernon Dent): Excellent, Excellent!  On your way with winged feet.
Curly (Curly Howard): Aha, Yataminich, where are you?