Home » Posts » In the Sweet Pie and Pie

In the Sweet Pie and Pie 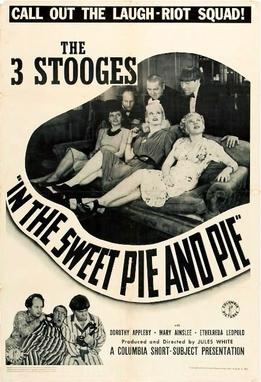 The Three Stooges made many movies that culminated in pie fights – but none better than In the Sweet Pie and Pie (1941).  The movie begins with Moe, Larry, and Curly in prison, awaiting execution for a murder that they did not commit.  An early comedy moment happens as the Three Stooges try to saw their way through the prison bars – musically!  It failed, however, and three young women (Tiska, Taska, and Baska) need to be married before midnight in order to inherit a fortune and ask the Three Stooges to marry them.  Moe, Larry, and Curly enthusiastically agree, but once the girls are legally married, they leave without a thank you – or a kiss.  And the Three Stooges are about to be executed.

However, at the last moment, the real murderers confess – and Moe, Larry, and Curly are free to be reunited with their new brides, who are none too happy to see their “husbands.” At the suggestion of their lawyer, they throw a high-society party, expecting the Three Stooges to humiliate them, and thus give them an excuse for divorce.  Moe, Larry, and Curly, however, are determined to do their very best to be gentlemen and prove themselves to their brides.

The eventual society party, and the pie fight that follows, is one of the highlights of the Three Stooges film career.  In fact, many of the pie fights from later films were actually clips of this fight, used over and over.  Three Stooges regular Vernon Dent has a minor role as a Senator at the party who gets “pied.”  The pie fight itself is hilarious, and ends with the girls deciding that they want to keep the Three Stooges, and fire their lawyer instead!

An excellent Three Stooges short, that is highly recommended.  In the Sweet Pie and Pie is available on The Three Stooges Collection, Vol. 3: 1940-1942.

Larry (Larry Fine) Say, what do we know about society?
Moe (Moe Howard): Well startin’ tomorrow we’re gonna learn. We gotta act like gentlemen so these dames we married won’t have any excuse for throwing us out.
Curly (Curly Howard): You mean to say I can’t go to sleep with my shoes on?
Moe (Moe Howard): That’s exactly what I mean now get to bed, like a gentleman.

Taska: [the sisters propose a toast] Here’s to us, three new widows!

Mrs. Gottrocks: I hear you have done much traveling. Are you familiar with the Great Wall of China?
Curly (Curly Howard): No, but I know a big fence in Chicago!

Williams: [Moe throws the cake on Mrs. Gottrocks by accident after the butler hits him deliberately] He did it.
Mrs. Gottrocks: Thank you …
[Turns to look at Moe, but hits Williams in the face with a pie]
Mrs. Gottrocks: But you started it!

Female party guest: Somebody give me a pie!

Senator (Vernon Dent): Most parties bore me. But I know I’m gonna get a big bang out of this one. [a pie hits him in the face]