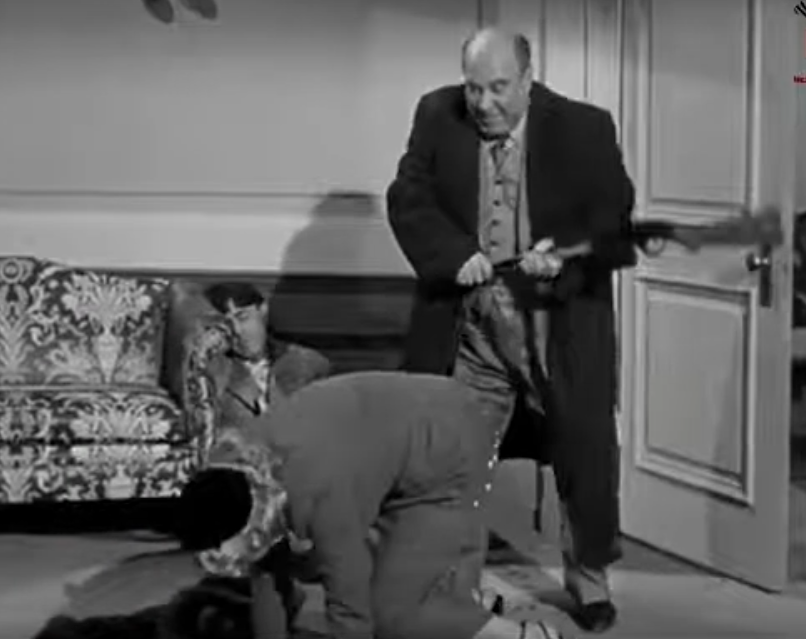 In Rusty Romeos, the Three Stooges are all engaged to the same gold-digger. She plans to get engagement rings from each, and abandon them. This leads to a fight, until Joe gets his revenge “in the end”.

Referring to Rusty Romeos as a remake of Corny Casanovas is more than charitable. The bulk of the second half is reused footage, with the new footage having Joe Besser replace Shemp Howard‘s earlier work. The first half is a remake of the original short, with precious little new material. Although, it should be said in fairness, the ending here involves Connie getting her just deserts. And, I enjoy this ending more than the original.

Having said that, if you’ve seen Corny Casanovas, there’s nothing else that makes Rusty Romeos worth watching. The plot, dialog, slapstick, etc. is all the same. I’m not a fan of Joe Besser as the third Stooge, but I don’t blame him for this short. It’s simply a re-run of a Shemp short from 5 years prior.

Moe: Hey, imbecile.
[Larry and Joe both respond] What?

[Joe has hit Moe’s hand with a tack hammer after putting on his glassses]
Joe: I’m sorry, Moe — I never could see out of these bicycle-focals.

Moe: You hold your tongue!
Joe: I can’t! It’s too slippery!