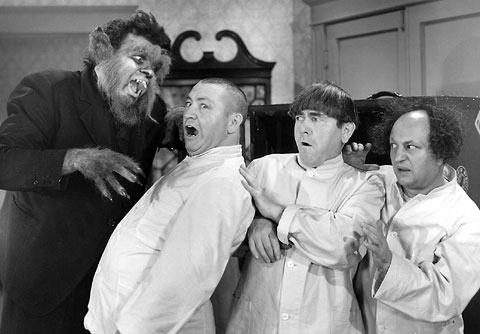 In Idle Roomers, Lupe the wolf man menaces the Three Stooges in a hotel!

The hotel clerk eventually collapses the bench that they’re sleeping on.  And after some slapstick help from Moe they manage to untangle themselves. Then, they fight over who will carry the pretty lady’s baggage to the 8th floor.  The Three Stooges flip a coin to see who gets the honor, with Curly and Larry flipping a coin, looking at it. But Moe takes their coins without even looking at his, announcing “Heads”! It’s quite funny to hear Larry telling Christine that he’ll have “his boy” (Moe) bring up her other bags.  And Moe taking his revenge on him with the help of the elevator doors.

Taking the bags to the room

Moe and Larry fight over carrying the bags into the room, only to find Curly already there, curled up in a chair; Moe takes his revenge on him, twisting Curly’s leg like an airplane propeller.  Curly leaves, only to knock on the door again, irritating Moe into chasing him out.  There’s another knock on the door, and Moe decides to teach Curly a lesson, dumping a large vase full of water on the other side of the door – soaking the husband, causing the Stooges to flee the scene.

Later, Moe loads up Curly like a pack mule, in a very funny visual joke.  As Curly carries the load through the doorway, the bulk of the baggage falls, burying Moe in an avalanche of suitcases.  Up on the 8th floor, Curly begins carrying a large trunk down the corridor, while unknown to him Larry is pulling up the carpet, causing Curly to walk on an improvised conveyor belt down the “longest corridor in the world”.  Eventually, Curly gets to the hotel room and puts down the large trunk, only for Vernon Dent to think that he’s getting fresh.  And Vernon uses his “show business” skills as a knife thrower to drive his point home, causing Curly to flee with large theatrical daggers stuck in his posterior.

The second half of the short film begins as Vernon Dent unveils the content of the large trunk to Christine.  It’s the new attraction for their carnival Lupe the Wolf Man!  Although he looks ferocious, he’s totally harmless.  Unless he hears music, which causes him to fly into a rage.  Soon enough, Curly unintentionally releases Lupe while cleaning the hotel room, and turns on the radio to listen to the music.  Lupe throws the radio out of the room, hitting Moe, causing the first of several times throughout the short where one of the Stooges mistakes Lupe’s violence for someone else (typically Moe).

Lupe starts wandering through the hotel, with the Three Stooges tasked at catching “the burglar”, leading to some funny slapstick, including Curly and Lupe doing the “broken mirror” routine (Groucho and Harpo Marx did the same basic routine in Duck Soup) with Lupe pretending to be Curly’s reflection, a funny routine that ends with Lupe chasing Curly out of the room.

Idle Roomers is a funny Three Stooges short film and is available on DVD as part of The Three Stooges Collection volume 4. Be sure to check out the funny movie quotes as well!