How High is Up? 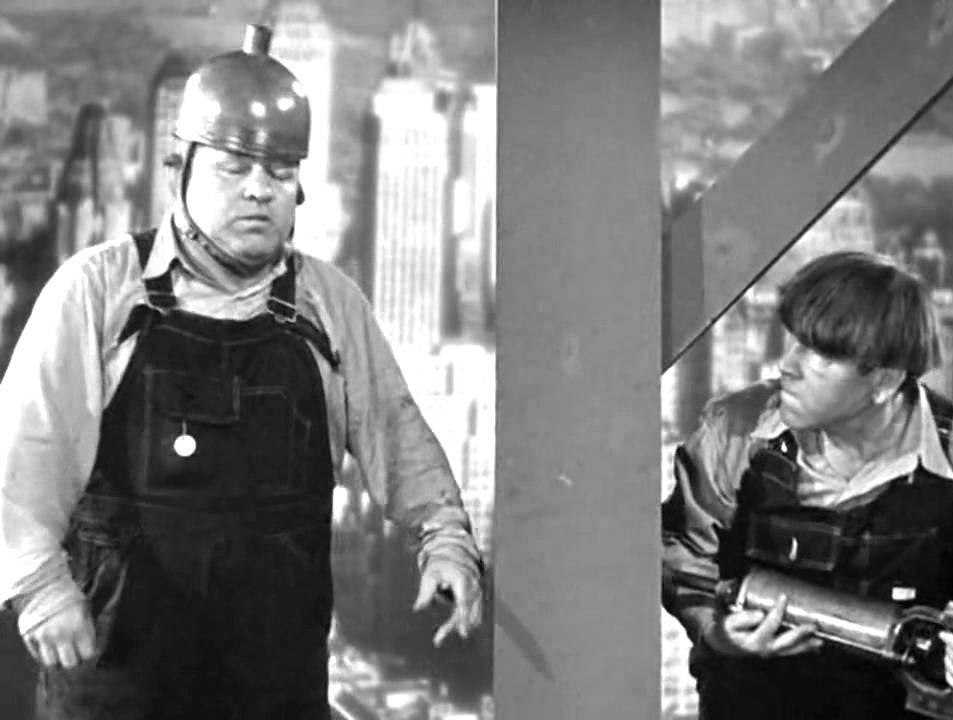 Like most of the Three Stooges short films, How High Is Up? is broken up into two parts. It begins with the Three Stooges (Moe, Larry and Curly) as tinkers (workers who would make minor repairs to pots, pans, and the like). They are sleeping on a mattress underneath their vehicle. Once a worker drains water from a fire hydrant, the Stooges float down the street. Eventually they’re rudely awakened by a police officer.

Fleeing back to their vehicle, Moe tasks Curly with repairing a flat tire. Which Curly attempts to do with a slice of salami.  Shortly after, Moe and Larry try to help Curly take off his too-small sweater – a slapstick affair.  After, they try to drum up business by sabotaging workers’ lunch pails with punctures.  While running away from the rightful wrath of the workers, the Stooges take refuge in a construction site. Where they claim to be “the best riveters that ever riveted a rivet!” … And leading to the second half of the short.

Soon, the Three Stooges are ascending to the 97th floor of the skyscraper being constructed. Complete with Curly carrying a parachute due to his fear of heights.  They shortly begin various slapstick shenanigans with red-hot rivets and rivet guns. This includes Curly nearly eating a rivet and almost sliding off a girder due to spilled grease.  Eventually, the boss (Three Stooges regular Vernon Dent) arrives. He sees the Escher-like job that the Stooges have done, and gets a red-hot rivet dropped down his shirt for his troubles.

The Stooges parachute to safety, landing in their car and driving away… With their parachute covering them, blinding all three and causing their car to veer madly.

There’s a lot of verbal humor as well – check out the funny movie quotes from How High is Up?

Editorial review of How High is Up? courtesy of Amazon.com

“How High Is Up?” (1940, number 48) is plotless and devotes far too much footage to trying to get Curly out of a tight sweater. Once they are up on the 97th floor of a building under construction, only Curly’s balletic skills save the film from utter predictability. Even Laurel & Hardy could not make gold out of this high-on-a-skyscraper situation. Actor spotters might notice Bruce Bennet (otherwise known as Herman Brix when he played Tarzan) as a bit player. –Frank Behrens

How High is Up? from Patrick J Mele on Vimeo.