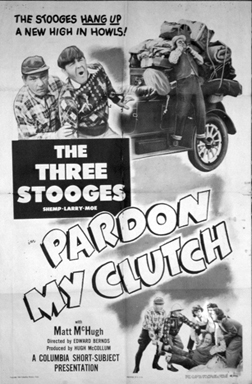 Synopsis of Pardon My Clutch

In Pardon My Clutch, Shemp is feeling sick.  The Stooges’ friend, Claude, “diagnoses” the need for a vacation, and sells them his car.  The car is a lemon, but when a stranger offers to pay more for it, Claude reneges on the deal.

Review of Pardon My Clutch

Pardon My Clutch is a funny Shemp-era Three Stooges short film.  Like many of the Three Stooges shorts, it’s split in half.  The first half begins with Shemp sick in bed.  Their know-it-all friend, Claude, has just given his a sleeping pill and leaves to get his “doctoring” book.  Moe and Larry wake up Shemp so he can take his next sleeping pill.  And, taking the instructions literally, they have him “skip an hour” after.  When Claude comes back, he “diagnoses” that Shemp needs to have a tooth pulled.  After the typical shenanigans, the tooth comes out, and Shemp passes out.

Second half of Pardon My Clutch

In the second half of Pardon My Clutch, Claude diagnoses that Shemp needs a few weeks camping.  He “kindly” offers to sell them his car for $900.  And he even throws in camping equipment.  The Stooges decide to practise setting up the tent in their living room, with the expected results.  Eventually, Claude delivers the car.  It’s a “Columbus” that looks old enough for Columbus to have driven.  After some slapstick loading of the car, changing a flat tire, and fighting with a gas station attendant, it’s time to leave.

However, a man in a suit and bowler hat (Emil Sitka) has been lurking, watching through the bushes.  After the car has a minor explosion when the Stooges try to start it, he introduces himself.  He claims to be with a movie studio and wants to buy the car for $2,000.  The Stooges are happy to do so, but Claude barges in.  “I didn’t sign no papers!” and gives the Stooges their money back.  He wants to sell the car to Emil, but it turns out that Emil’s an escapee from an insane asylum.  And Claude goes to join them!

In all, Pardon My Clutch is a funny, fast-paced Three Stooges short film, and recommended.

Moe: Don’t worry about everything. Anything will be okay.

Moe: He’s sleeping like a baby.  It’s a shame to disturb him.
Larry: But he’s got to take his second pill so he can go to sleep!
Moe: Maybe you’ve got something there.

Claude: It can be caused by excessive use of the grey matter of the brain.
Moe: Aw, must be something else.
Shemp: Sure, can’t be that.

Larry: You know, fish is great brain food.
Moe: You should fish for a whale! [slaps Larry]

Moe: [to Larry] Shemp has passed out! Get some water!
Shemp: No, champagne.

Larry: Next time you come in, knock first.  And then don’t come in!

Moe: [hearing the sound of a tire deflating] What’re you hissin’ at me for?
Shemp: I ain’t hissin’ at you … but it ain’t a bad idea!

Trivia for Pardon My Clutch