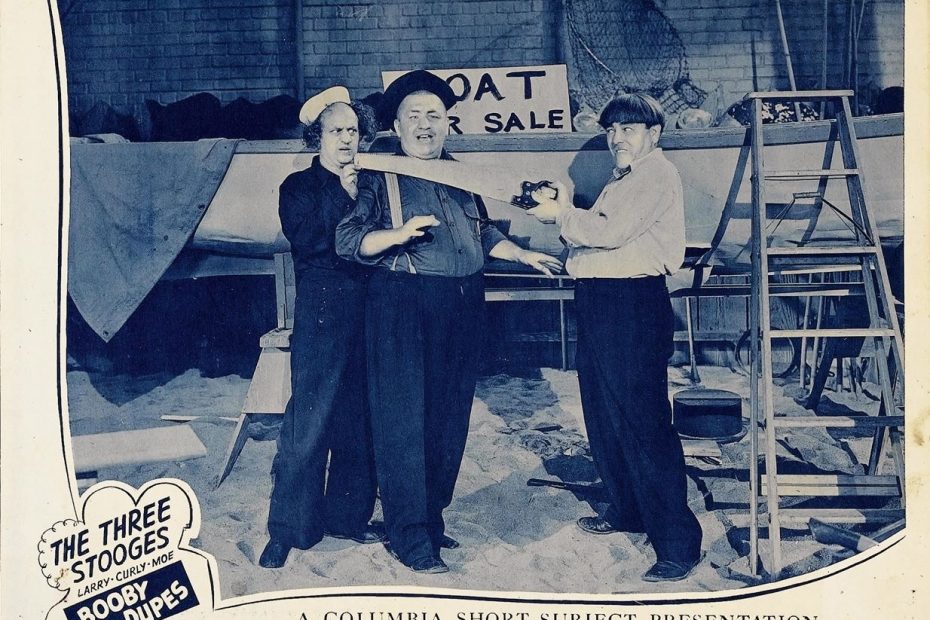 The Three Stooges are selling fish, and in an effort to do better they decide to cut out the middleman and buy a boat in order to catch their own fish. The boat is a floating junk heap, that is soon sinking, with Curly’s help. Things are not helped when the Stooges find a white flag with a big red dot in the middle, which they start waving in order to attract help.  But it ends with the U.S. military bombing them, seeing them waving a Japanese flag (this short took place during World War II).

Booby Dupes, like many of the Three Stooges short films, is broken into two halves. In the first half, the Stooges (Moe Howard, Larry Fine, Curly Howard) are inept fish salesmen, who decide to buy their own fishing boat to improve their profits. They go to get sailor suits first, and Curly steals a captain’s uniform from Vernon Dent.  And dressed as a naval captain, picks up a beautiful young lady for a date at the beach. However, the girl’s jealous boyfriend — Vernon Dent! — soon shows up, dressed in Curly’s too-small outfit, while Curly hides in the sand — a very funny routine.

In the second half, the Stooges purchase a broken-down boat and do the typical slapstick trying to make it sea worthy. Despite their best efforts, they succeed — and soon launch out to sea. In typical Three Stooges fashion, Curly tries to use a hatchet on a fish, knocks a hole in the boat, and drills two more holes to let the water out! The Stooges abandon ship and get into their small dingy, and try to signal for help with a stained rag they find in the boat. However, the white rag has a red stain in middle, looking like the flag of Imperial Japan, and they’re soon being bombed by the U.S. military — until they decide to use Curly’s Victrola (their car’s “radio” from the first half of the short) as an improvised motor, and speed away, ending the short.

Booby Dupes is available on DVD as part of the Three Stooges Collection, volume 4.

“Booby Dupes” begins as a literal remake of the 1932 Laurel and Hardy classic “Towed in a Hole,” and perhaps it suffers by comparison. It is business as usual as they try to fix up a craft that is not seaworthy, which they of course manage to sink on their first fishing trip out. Their signaling a plane with a towel that has a paint stain very much like a Japanese flag is merely a contrivance to bring the film to an all-too-common hasty conclusion.

Girl: [to Curly] What a beautiful head of bone you have!

Larry: [after selling the Stooges’ car] What a sucker! Wait’ll he tries to run our car!

[the stooges start laughing]
Boat Man: Wait’ll you try to run that boat!

Moe: Hey, fellas, got a spare hammer?
Larry: [hands Moe a hammer] Here’s one.
Moe: Thanks! [hits Curly and Larry with it]

[the Stooges’ boat has a hole in it]
Moe: We have to bail out!
Larry: I ain’t got a parachute!