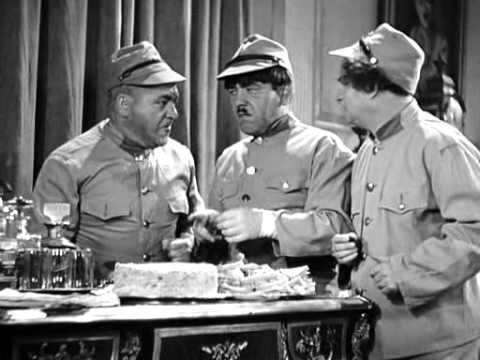 Synopsis of No Dough Boys

In No Dough Boys, the Three Stooges (Moe, Larry, Curly) are dressed up as Japanese soldiers for their job as magazine models. On their lunch break they go into a nearby restaurant, still in costume and makeup, causing the waiter to mistake them for the real thing, and a chase is on! The boys fall through a trap door, and into a nest of Nazi spies where they are mistaken for Naki, Saki and Waki, three Japanese soldiers. The Stooges try to act the part, including a comedic demonstration of acrobatics and jiu-jitsu to their Nazi hosts — until the real Japanese soldiers arrive!

Review of No Dough Boys 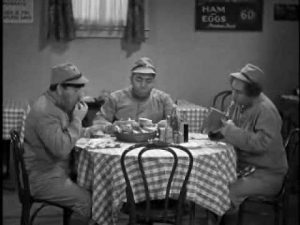 No Dough Boys begins with the Three Stooges (Moe Howard, Larry Fine, Curly Howard) in make up, dressed as Japanese soldiers for a photo shoot for a magazine. They’re given 15 minutes for lunch — not enough time to change costume — and so they go out to a diner for a quick bite. Before they go, there’s an inspired bit of comedy as Moe keeps Curly from smoking on set; first a lit cigarette, then a cigar, then a pipe — and Curly finally gets the edge by shaping his hand into a pipe, filling it with tobacco, and smoking his thumb! It’s a very funny bit.

At the diner, the waiter is reading a newspaper headline about a Japanese submarine having been blown up off the coast, with three Japanese soldiers having escaped — and then the Three Stooges walk in, dressed as Japanese soldiers. It doesn’t take long for the inevitable fight to begin, complete with Curly being hit with a large bowl of mashed potatoes, and the Stooges beating a hasty retreat out the back of the restaurant. 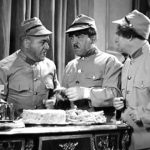 Realizing why the waiter attacked them, the Stooges laugh at the situation, lean against a wall in the alley — and fall through a hidden door into a mansion! After a moment of looking around a Nazi agent named Hugo (played by Three Stooges regular Vernon Dent, complete with German accent) greets them, mistaking them for Naki, Saki and Waki — the three Japanese soldiers.

The Stooges take the opportunity to “heil” with a combined smack to Vernon’s forehead, and he introduces them to three female Nazi agents – Celia Zweiback (Three Stooges regular Christine McIntyre), Amelia Schwarzbrot (Kelly Flint), and Stella Pumpernickle  (Judy Malcolm). The Stooges are offered refreshments, and while they plan to capture the real spies, Hugo and the girls reveal to the audience that they know that the Stooges are imposters — and plan to kill them once they find out why they’ve arrived. 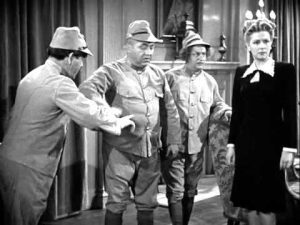 Christine McIntyre pretends to have seen their “famous” acrobatic act, and soon the Stooges are attempting to be acrobats and fail miserably, although comedically. A demonstration of jujitsu ends with Christine throwing Curly around, which leads to their acrobatic act — which involves a lot of falling down. 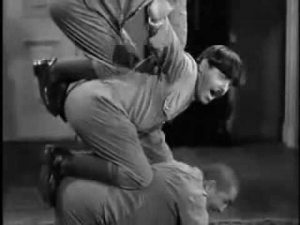 Shortly afterward, the actual Japanese soldiers arrive, and the typical melee happens, with the lights being turned off and on when it’s funny, ending with the Japanese defeated and Hugo stripped down to his swastika long johns, and the Stooges stand triumphant.

In short, No Dough Boys isn’t a bad Three Stooges comedy, but not a great one, either. The central gag of the acrobatics demonstration is, in my opinion, the weakest part of the entire short.

Curly: [after Moe has punched him] I’ll give you …
Moe: [menacingly] What?
Curly: [sheepishly] The meanest look.

Moe: [on break from a photo shoot, Moe catches Curly smoking a cigarette] What’s the matter with you? You wanna burn down the scenery? Read that sign.
Curly: “Hey you, no smoking.”
Moe: Well?
Curly: It says you, not me. Nyuck, nyuck, nyuck.

Moe: Watch your P’s and Q’s.
Curly: Don’t forget to dot the I’s.
Moe: Yeah [pokes Curly in the eyes]

Hugo: [to Curly] Then you must be Waki!
Curly: [with Japanese accent] Ah so, me very, very wacky!

Moe [after being introduced to Celia Zweiback, Amelia Schwarzbrot, and Stella Pumpernickle] : They are very well bred.
Curly: I take mine toasted!

Moe: [doing an acrobatic act, Curly’s about to roll on him] No Wacky, [points to Larry] Nacky!
Curly: My mistacky.

Moe: [in a Japanese accent] And now we do berry bootiful trick! Is carred sree-high! If top man not careful, farring down, spirring brains and brood! Berry bootiful!

Larry: [to Hugo] So you Rat-zis want the world! Well TAKE it!
[crashes a globe over Hugo’s head]