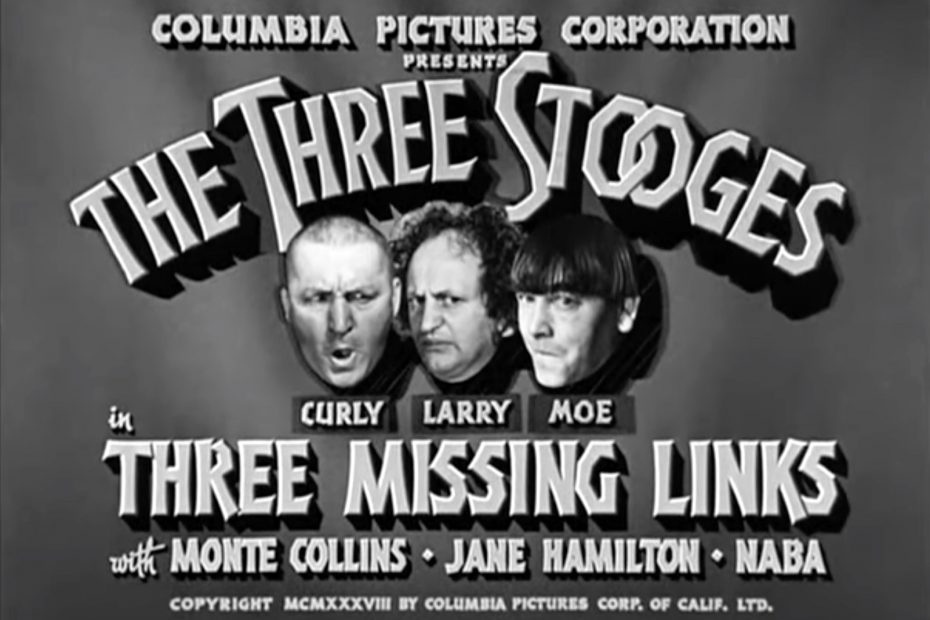 In Three Missing Links the Three Stooges (Moe, Larry and Curly) are janitors at the ‘Super Terrific Productions’ movie studio, where the director and producer are looking for a leading man for their new jungle picture to star with the beautiful Mirabel Mirabel (played by Jane Hamilton) – but the leading man needs to look like a gorilla

Once in Africa, they are on their own, and Moe, Larry and Curly soon run into a cannibalistic medicine man, whom they soon escape from.  With Curly having taken a handful of ‘love candy’ on the way out.  Later the Stooges try to set up camp (with a funny bit where Curly is trying to pound in very reluctant tent stakes), and later that night the Stooges are trying to have a good night’s sleep when a wandering lion starts licking their feet.

The next morning comes the major conflict of the movie, where a gorilla wonders onto the scene, with the others mistaking for the gorilla for Curly.  Slapstick runs wild, as they try to get away from the gorilla, with Curly alternately fighting and fleeing the “real” gorilla, only to end when Curly swallows some of his ‘love candy’ and falling in love — with the gorilla! The short film ends with a smitten Curly chasing the poor gorilla through the jungle.

Three Missing Links is available on DVD as part of The Three Stooges Collection, Vol. 2: 1937-1939

Moe (Moe Howard): What’cha duck for? See what you made me do?  That’ll cost us a month’s salary!

Director: I wonder where that safari is? We ought to be in Africa by now.
Curly (Curly Howard): Maybe they’re safari away we’ll never catch ’em!

Curly (Curly Howard): What do we have for supper?
Medicine man: Nice, fat missionary.

Moe (Moe Howard): Just watch your P’s and Q’s.
Curly (Curly Howard): Where are they?

Moe (Moe Howard): [to Curly, who’s laughing uncontrollably as a lion is licking his feet] What’s eating you?

[Larry thinks that a real gorilla behind him is Curly in a costume]
Larry (Larry Fine): Cut it out, ya puddinhead!
Curly (Curly Howard): I’m not me!