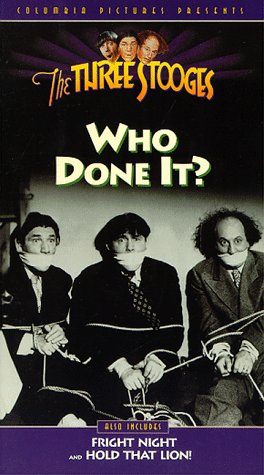 Shemp: The niece is nice!

Shemp: [after Moe has kicked him] Don’t you raise a hand to me!

Moe: There must be a secret panel! You take that wall.
Shemp: To where?

Old Man Goodrich (Emil Sitka): I’m a fan of classical music. They tied me up and made me listen to singing commercials! It was horrible, horrible …

Editorial review of Who Done It? courtesy of Amazon.com

There is little originality in the plot of “Who Done It?” (1949, number 114), in which a prominent citizen (played by Emil Stika) is attacked after calling in detectives–who are first seen tied up after a robbery of their own office. They arrive at the usual spooky house and are threatened by sexy Christine McIntyre and three other creeps, and there is little they can do for most of the film except run from room to room, doing more damage to each other than to the crooks. There is the old routine of switching the poisoned drinks around, but Shemp’s reaction to drinking the poison–done in quick motion and presumably by a stuntman–is hilarious. There is also a good “turning out the lights” fight that does show some imagination. –Frank Behrens