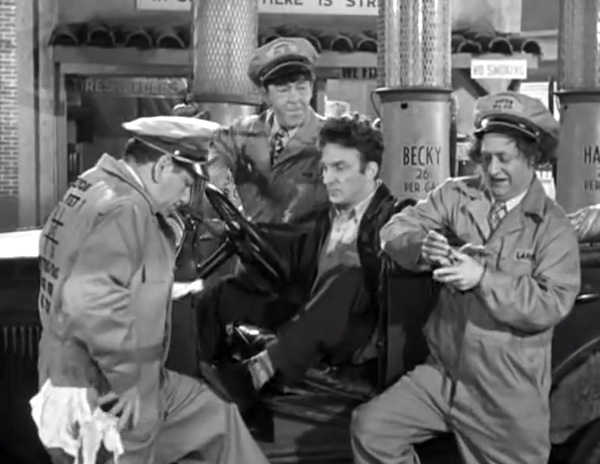 Slaphappy Sleuths begins with Fuller Grime of the Onion Oil Company (I. M. Greecy, president) explains to the Three Stooges (Moe Howard, Larry Fine and Shemp Howard) how they’ve been sent from a detective agency to work undercover as gas station attendants and capture the crooks who have been looting his company’s gas stations …

If he can be convinced that they’re intelligent enough to do the job.  Despite failing the tests spectacularly (in an extended bit – my favorite is where Shemp foils Moe from poking him in the rear, and proceeds to turn it into lunch) – soon the Stooges are on the job as gas station attendants.

Their first (suffering) customer is Emil Sitka. He pulls in to simply get some gas. And the Three Stooges “super service” (a shoutout to Violent is the Word for Curly)! He’s soon having grease in his face, popcorn in his radiator, and beaten with his own automobile hood.

After poor Emil leaves, their next customer pulls into the gas station. He wants his oil changed – “and I’m in a terrible hurry”. These customers (Stanley Blystone and Nanette Bordeaux) are, in actuality, the criminals that the Three Stooges are looking for. After they drive off without finishing the oil change, the Stooges realize that they’ve been robbed!

Tracking down the crooks

After some slapstick dealing with getting cleaned up, the Three Stooges are on the trail. They follow the trail of leaking oil … all the way to the criminals’ apartment! The Stooges quickly get into the apartment and overpower the male crook (“give him the door treatment”).  When the rest of the gang (Nanette Bordeaux, Joe Palma and Blackie Whiteford) come in, leading to a slapstick fight. One of the funniest bits is a recurring gag where Nanette sneaks up behind one of the Stooges …. But she’s knocked unconscious by her own men when the Stooge ducks.  After Shemp does the “sharing a jacket with one villain” routine, Moe and Larry torture one of the robbers to find out where the money is … and the short ends with the Three Stooges calling the police, before knocking themselves out cold as well.

Fuller Grimes: Did anyone ever aim a gun at you?
Larry: Yeah, but he couldn’t shoot me!
Fuller Grimes: How come?
Larry: I had my finger in the barrel?

Fuller Grimes: You were in the service, won’t you?
Moe: That’s right.
Fuller Grimes: Did you ever get a commission?
Moe: No, just straight salary.

Fuller Grimes: Are you a good detective?
Shemp: Am I? [holds up his shoe] You see this heel? I sure ran that down!

Moe: [outside the criminals’ apartment] How’d they get the car in there?