Home » Posts » Violent is the Word for Curly

Violent is the Word for Curly 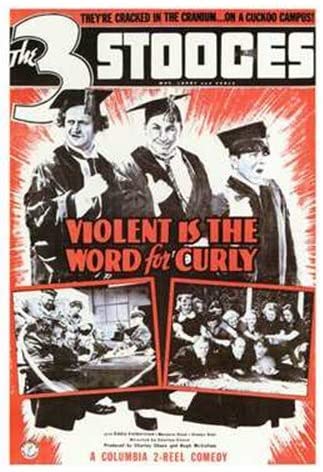 Even though it is not one of their funniest short films, Violent is the Word for Curly is one of the Three Stooges best known short films. Thanks to the famous performance of Swinging the Alphabet – also known as the “B A Bay” song.

Violent is the Word for Curly begins with Moe, Larry, and Curly working at a gas station, where they give “Super Service!” Until Larry fills the radiator with gasoline, while Curly fills the gas tank with water, causing a customer’s car to explode!  The Three Stooges run away.  After roasting Curly over a spit, (a very funny scene, even though Curly was actually burned during the filming), the Three Stooges disguise themselves in clothes left from the exploded car …. Which belonged to three European professors.  Dressed in the professors’ outfits, the boys are mistaken for them and taken to Mildew College.

Once there, the boys begin “teaching”, including their famous Swinging the Alphabet.  When the real professors show up, the Three Stooges try to convince a rich woman, the school’s benefactor, that an athletics program is more important. Their athletics demonstration comes to an explosive end when the real professors slip them a nitroglycerin basketball, blowing the professors over the wall of the college, and into the arms of the Stooges and the rich benefactor, who has promised to endow the university’s athletic fund with the return of the professors.

Trivia for Violent is the Word for Curly

Acme Service Station Owner (Bud Jamison): I’m going across the street, men, for a sandwich. Now listen, when the customers come in, give ’em service. Now, this is your first day on the job, so show me that you’ve got what it takes. Don’t be afraid to push those sponges around. Use a little elbow grease!
Curly (Curly Howard): Suppose it’s knee-action?
[Moe backhand slaps Curly]
Curly (Curly Howard): [getting in Larry’s face] What’s the idea?
Larry (Larry Fine): Mistaken identity!
[points at Moe]
Curly (Curly Howard): [waving nervously at Moe] Hiya, pal!

[attempting to thaw the frozen Curly over a fire]
Moe (Moe Howard): Twenty minutes to a pound! Eh, eh – we’ll here a month!

Curly (Curly Howard): [to cute coed] I’ll meet you in the gymnasium after class. I’ll be standing next to the dumbbells. You’ll know me, I’ll be wearing a hat.

Moe (Moe Howard): Don’t ya know it’s bad etiquette to reach in front of a person when said person is trying to snag a morsel of food?

Moe (Moe Howard): I oughta beat yer brains in …  and I think I will!

Miss Katsby: Oh, you’ll just love it. Mildew has a lovely student body.
Curly (Curly Howard): Yours wouldn’t be so bad either if you took off about twenty pounds!

Professor 1: Should I put in a little of this? [nitroglycerine]
Professor 2: Just a little – about 1 quart.