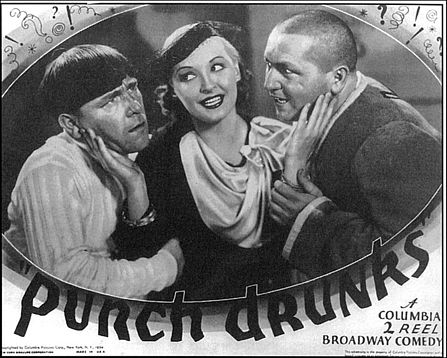 Punch Drunks is one of the very best Three Stooges short films – oddly enough, it’s also one of their most different films.  At the beginning of the movie, the Stooges do not know each other; Curly (spelled “Curley” in the credits here) is a waiter at a restaurant, where Moe, a down-and-out boxing promoter, is eating.  Larry sits nearby, with his violin at hand.  Once Larry begins playing Pop Goes the Weasel on his violin, Curly goes into a violent rage, attacking everyone in the restaurant, including knocking out a boxing champ!  Moe sees the possibilities inherent in this and hires both Larry and Curly, whom he begins promoting as K.O. Stradivarius.

Training ensues, complete with a very funny segment where they’re outdoors, and help a female motorist whose car is stuck.  Curly begins winning fight after fight, culminating in the big title match — but Larry’s violin is accidentally broken!  Curly, on his own in the boxing ring against the champion, is pure comedy gold, as is Larry’s substitute music.  A very funny short film that’s in my Top 10 Three Stooges short film list — and I hope you enjoy it as much as I do.

Curly (Curly Howard): Every time I hear that Weasel tune, something POPS inside of me!

[Curly/KO Stradivarius tries to leave the boxing ring but gets caught in the ropes]
Curly (Curly Howard): Time out! Time out!
Moe (Moe Howard): I suppose you’ll want the afternoon off.