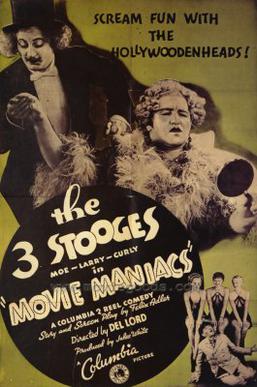 Movie Maniacs, the Three Stooges’ 13th Columbia short, spoofs movie-making and, as Moe puts it, the thousands who know nothing about making them. It also gives us a wonderful chance to see a vaudeville routine with Curly in drag and Larry as the debonair suitor.  Not to mention Moe’s method of teaching acting by having Larry and Curly manipulate a couple of actors like hand puppets.

Stooges on a train

Curly as the “chef” in the moving boxcar in Movie Maniacs

Moe, Larry and Curly are stowaways in a boxcar filled with furniture heading for Hollywood.  After a short sleeping sequence (where they break the bed), Curly cooks breakfast – with his disastrous pancake flipping. While Larry presses Moe’s white trousers, with equal disaster.  And “paints over” his mistake. It’s a very funny slapstick routine.

Soon, they arrive at a Hollywood studio, Carnation Pictures (“from contented actors …”). Fuller Rath (Bud Jamison) is the studio manager, who receives a telegram.  It announces that “Mr. Smith” and his two assistants will be arriving, to take over the studio.  Moe, Larry, and Curly arrive in time to … be thrown out by the studio guards.  But, after a moment, they use a clever bit to get past them – and get chased inside the studio. 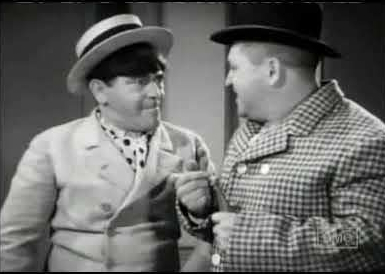 They burst into Fuller Rath’s office, just in time to be mistaken for the studio executives.  After Curly’s three large pencils routine, they toast to their success — and soon start destroying movies being filmed.  First, they “help” shoot a love scene.  After a funny bit of “actor puppetry”, the suffering director quits! And the actor.  And actress.  Which suits Moe just fine!

With Moe directing, Curly in drag as the lady, and Larry in a tuxedo, they shoot the “improved” scene.  However, Fuller Rath receives another telegram, realizes that the Stooges aren’t the executives, and the chase is on!  The Three Stooges hide in a “danger, keep out” room – what could go wrong?

The lions in the den that the Stooges have stumbled into let them know!  They escape into a nearby car, but one of the lions jumps in, and we can see it’s posterior hanging out the window as their getaway car careens down the street!

In short, Movie Maniacs is a good Three Stooges short, with them in their prime, and highly enjoyable.

Moe: [in bed with Larry and Curly] You suppose that puddin’ head kicked us?
Larry: How could he? He’s sound asleep.
Curly: [pretending] Soitenly I’m sound asleep.
Moe: Then how come your talkin’?
Curly: I’m talkin’ in my sleep!

Curly: How are we gonna get in pictures? We don’t know nothin’ about makin’ movies!
Moe: There’s a couple of thousand people in pictures now who know nothing about it. Three more won’t make any difference.

Fuller Rath (Bud Jamison): Go and prepare an office, and see they have everything they may possibly want!
Assistant: Yes, sir. I’ll order three blonde secretaries.

Moe: Boy, this picture business is tougher to get into to than I figured.
Larry: Don’t worry, a bad beginning is a good ending.
Curly: Soitenly! If at first you don’t succeed, keep on suckin’ til you do suck seed.

Moe: Cut, cut, cut. You ain’t shooting the picture right.
Director Cecil Z. Sweinhardt (Harry Semels): Why, what’s the matter with it?
Moe: There’s no action. It was no good from the first kiss.
Director Cecil Z. Sweinhardt (Harry Semels): Kiss? What do you know about kisses?
Moe: [turns to Curly] Tell him what we know about kisses.
Curly: Uh…
Moe: That’s enough!

Leading Man (Kenneth Harlan): I quit!
Moe: Oh yeah, you’re fired!
Curly: You can’t fire him
Moe: Why not?
Curly: Cause he quit!