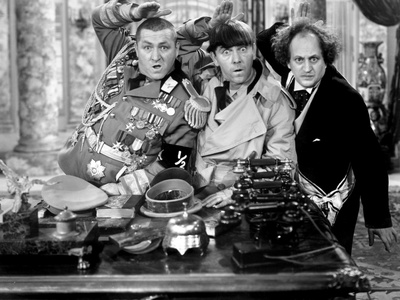 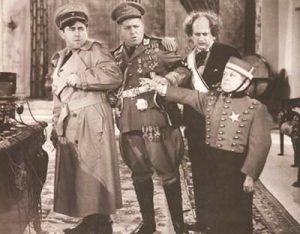 You Nazty Spy! is a rare treat of the Three Stooges.  In addition to being a hysterically funny short film, You Nazty Spy! is also a political satire, and bears the honor of being the first anti-Nazi film parody, beating Charlie Chaplin’s famous film, The Great Dictator, by several months.  The basic premise has Moe, Larry and Curly working as paperhangers at the mansion of a government official of the imaginary nation of Moronica.  The government officials (Mr. Ixnay, Mr. Ohnay and Mr. Amscray) are planning to overthrow the monarch, and plan to replace him with a dictator who’s stupid enough to follow their instructions.  They decide upon the three paperhangers, who are offered the role of dictator (Moe Hailstone), field marshal (Curly Gallstone) and Minister of Propaganda (Larry Pebble).  Making fun of Adolph Hitler, Goering and Goebbels, respectively.  A very funny moment is where Moe is first contemplating the offer, and he accidentally picks up a small piece of electrical tape on a fingertip and transfers it beneath his nose, ala Hitler’s mustache.  Likewise, he runs his fingers through his hair and voila! the dictator Hailstone.

It’s a fast-paced short film, with plenty of both slapstick and verbal humor, which we’ve come to expect from the Stooges by this point.  Highlights of the film include the spy, Mata Herring (spoofing the famous female spy Mata Hari, played by the beautiful Lorna Gray), and a “peace” conference with their Axis partners, ending quickly with a typical Stooges slapstick fight — as well as their trademark map with the verbal humor of the names of the various countries. 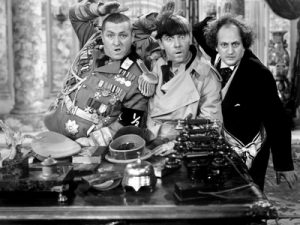 The film ends with the boys running away from an angry mob that’s attempting to overthrow the dictator, and locking themselves into a room for safety.  Only to realize that the room is filled with lions! Despite the ending, the film generated a sequel, I’ll Never Heil Again.  A very funny film that makes a serious point in a silly way, and is strongly recommended.  I rate it 4 clowns out of 5. 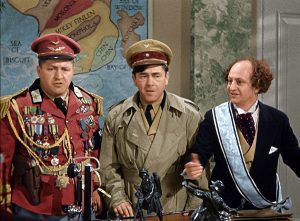 Mr. Ixnay: We’ve come here to offer you the greatest opportunity of your life.
Moe Hailstone (Moe Howard): You mean you’ll let us paper the living room?
Mr. Ixnay: No, no, no. You’re through with papering. My partners and I are going to make you Dictator of Moronica.
Moe Hailstone (Moe Howard): Dictator? What does a Dictator do?
Mr. Ixnay: A Dictator? Why, he makes love to beautiful women, drinks champagne, enjoys life and never works. He makes speeches to the people promising them plenty, gives them nothing and takes everything. That’s a Dictator.
Curly Gallstone, Field Marshal (Curly Howard): Hmph, a parasite. That’s for me.

Moe Hailstone (Moe Howard): We must throw of the yoke of monarchy, and make our country safe for hypocrisy!

Moe Hailstone (Moe Howard): What do you mean by reading a book? Suppose you learn something. Loyal Moronikans shouldn’t read. Take your troops out and have them burn every book in Moronika.

Moe Hailstone (Moe Howard): On second thought, throw him to the lions.
Curly Gallstone, Field Marshal (Curly Howard): We have no lions.  How about to the Tigers or the Cubs?

Larry Pebble, Minister of Propaganda (Larry Fine): What’s the matter with him?
Curly Gallstone, Field Marshal (Curly Howard): He’s a little grouchy.  He woke up on the wrong side of the gutter this morning.

Moe Hailstone (Moe Howard): And to think, I might have asked Mata Herring to marry me.
Larry Pebble, Minister of Propaganda (Larry Fine): You’ve have been in quite a pickle with that Herring.

Trivia for You Nazty Spy!