Home » Posts » Malice in the Palace

Malice in the Palace 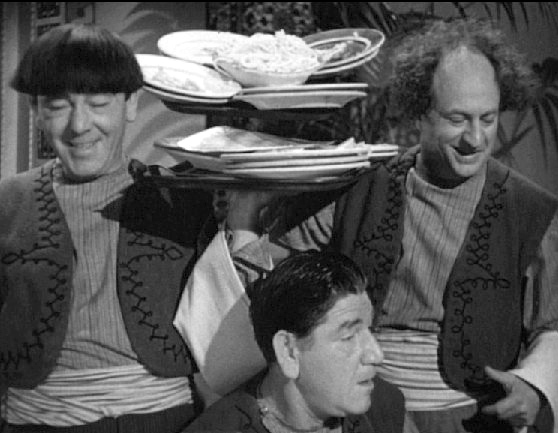 Synopsis of Malice in the Palace

Malice in the Palace is set in a desert land where the Three Stooges run a restaurant. There, the boys set out to recover the stolen Rootin Tootin diamond after they learn from the thieves that the Emir of Shmo has absconded with the contraband jewel. They journey to the stronghold of Shmo where they disguise as Santa Clauses and scare the ruler into giving them the diamond.

The hilarious routine with Larry preparing lunch in the kitchen of their while the customers mistakenly think that the dog and cat that are in the kitchen with Larry are … ingredients. It’s straight-out hilarious, one of the funniest Stooge bits ever filmed.

Moe: [to Hassen Ben Soba and Ginna Rumma] What’ll you have?
Hassan Ben Soba: We want…
Moe: [cutting him off] We don’t have any more.
Larry: All we got left are rabbit and hot dogs.
Hassan Ben Soba: Rabbit.
Ginna Rumma: Hot dogs.
Larry: Hot dog, they’ll take rabbit.

First the Three Stooges ruin their meal – truly hilarious. Then the two plotting thieves have been beaten to the punch! And they reveal themselves to be only menial laborers! But the Three Stooges plan to recover the stolen jewel for the reward. So, it’s off to the hideaway of the scoundrel that took it, the Emir of Schmo. “Cleverly” disguised as … Santa Claus?

There’s some horseplay with the palace guards, then harem girls. Then they frighten the Emir of Schmo into giving up the jewel, and order him to stand on his head into a lily pad! After a short fruit fight with the guards, they make their escape, ending the short film.