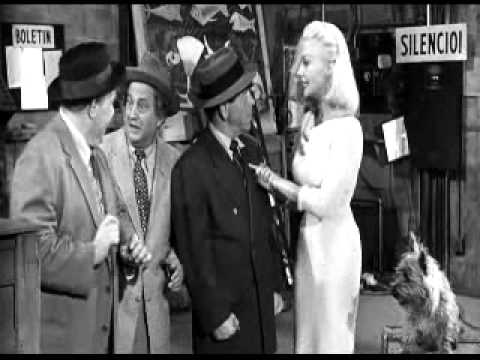 Sappy Bullfighters is the final Three Stooges short film – a reworking of What’s the Matador? The short film begins with the Three Stooges  (Moe Howard, Larry Fine, Joe Besser) having been fired. Fired from their engagement in Mexico for refusing to do 10 additional shows for free. Stranded without the money needed to get back home, a fellow performer — the lovely and kind-hearted Greta (Greta Thyssen) gets them an engagement, performing their comedy act at an actual bullfight at a stadium.

However, when Greta leaves, she takes the Stooges’ suitcase — with the props for their comedy matador act — by mistake. The Stooges follow her to her dressing room and join her in a snack.  Where Joe unwittingly drinks hot sauce and “douses” it with water from a flower vase. Greta’s husband (George J. Lewis) arrives, and Joe mistakenly thinks that Greta is calling him “sweetheart,” setting up the conflict.

The jealous husband throws the Stooges out — with the wrong suitcase again. They sneak back in, hide from the husband, and are soon discovered and make their escape. With the poor husband running his head into the door.

The next day at the stadium, Moe and Larry are inside a bull costume, while Joe plays the part of a matador for comedy. The act is a big hit, but the jealous husband bribes someone at the stadium to let a real bull loose.  With Joe thinking (at first) that it’s still Moe and Larry.  After some slapstick, Joe actually wins, and is carried out of the stadium as a hero — hitting his head on a pipe on the way out.