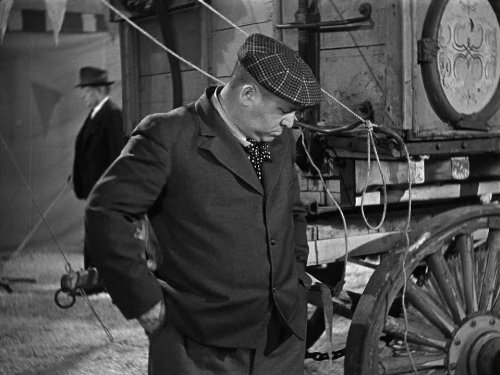 In Three Little Twirps, the Three Stooges have a job putting up posters for the circus, but thoroughly bungle the job.  They then discover that they get paid in circus tickets, not cash. At the circus, Curly accidentally finds a long string of tickets, and the boys try to scalp them. They’re chased by the cops and dragged before the circus owner, who’s mad at them for ruining his posters. Instead of sending them to jail, he offers them a job at the circus – as targets for the Mad Sultan of Abadabba, the spear thrower!

In short, Three Little Twirps is an enjoyable, but not outstanding, Curly-era Three Stooges short film.  It’s effectively an opportunity for Moe, Larry, and Curly to clown around at the circus.  Some of the highlights include:

It’s not bad, but I frankly find Charlie Chaplin‘s The Circus and the Marx Brothers‘ At the Circus both to be funnier – but that’s just my opinion.

“Three Little Twirps” (1943) is the 71st Columbia short for the Three Stooges and the special effects are, as always, low budget. The circus scenario calls for Curly to retreat onto a high wire to escape an angry wild man, and the wires holding him in place are plainly visible. But the old vaudeville knife- throwing routine is given a new twist by using spears, and it works well. It is good to see silent comedian Chester Conklin do a turn with Curly and Larry, who are inside a two-man horse costume. As happens too often in this series, the lack of plot leads to a weak and nonconclusive ending.