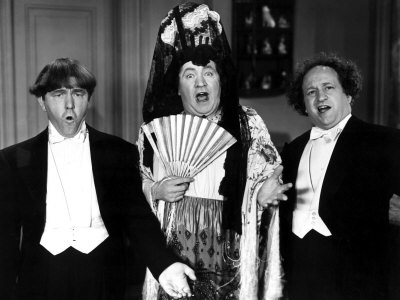 Many people consider Micro-Phonies to be one of the best Three Stooges short films, and I heartily agree.  The short film begins with the Three Stooges (Moe Howard, Larry Fine, Curly Howard) working at a radio station where, after a bit of slapstick, Moe falls and hits his head on a radiator.  He thinks he must be dead, since he hears an angel singing — but no, he’s hearing the beautiful singing of Alice Van Doren (played by Three Stooges regular Christine McIntyre, using her trained voice to good effect), sing “Voices of Spring” — she’s trying to audition for Mrs. Bixby’s radio program, but since she knows Mrs. Bixby (Symona Boniface) socially, she wants to audition under an assumed name; and to circumvent her father’s disapproval, as well.

Out in the hall, carrying pipes to hook up a radiator, Larry and Curly bonk Moe on the head, leading Moe to threaten them, and inadvertently hitting their boss.  A short pursuit ensues, leading the Stooges to duck into the first room they see, and accidentally hurt an Italian singer recording there, leading the singer to threaten and chase them, too — and the Three Stooges are on the run again, ducking into another room — this time containing a microphone.

While hiding, they start playing around with the microphone (leading to Moe’s memorable commercial for “Gritto, the soap that gives your hands that dishpan look”), and Larry play’s Alice’s record.  Curly, playing around, lip-syncs to the singing, and starts putting on props lying around to imitate a female singer — when Mrs. Bixby walks in and wants to hire “her”  for Mrs. Bixby’s radio show, as well as for a party.  Smelling money, Moe agrees and signs Curly, as Señorita Cucaracha, planning to have Curly lip-synch to the record again at the party.

That night at the party, Curly arrives (dressed appropriately as Señorita Cucaracha), with Larry as Señor Mucho and Moe as Señor Gusto.  They are surprised to see the Italian singer from the radio station there, and initially plan to leave before he can recognize the Stooges — until they realize that the near-sighted singer’s glasses are broken.  In addition, the singer Alice is there at the party as well.  When the Italian singer begins singing, the Three Stooges begin launching cherries into his open mouth — since he’s “muscling in” on their territory.  Moe gets angry when Larry and Curly urge him to be careful with the record — and Moe breaks it over Curly’s head.

Undaunted, Moe grabs an available record, “Sextet from Lucia” and the trio begin lip-synching.  At first, all goes well, until the Italian singer discovers the deception and unplugs the phonograph.  After being threatened by the Italian singer, the Stooges plan to leave, until Alice asks them to lip sync to her singing again, so she can convince her father to let her sing.  All goes well again, until the Italian singer throws a banana into Curly’s mouth, revealing Christine’s singing ability — and leading to the Three Stooges fleeing amidst a barrage of phonograph records.

Moe (Moe Howard): We eluded him!
Curly (Curly Howard): Yeah, we got away, too!

Moe (Moe Howard): [sees a microphone] Oh, a micro-phoney! [Moe goes to the microphone]
Curly (Curly Howard): And a phoney at the mike!

On the way to the party

Moe (Moe Howard): [as the near-sighted Italian singer is staring at him without his glasses] Oh, short eyeballs, eh?

Larry (Larry Fine): [to pianist] Do you know “Sextet by Lucy“?
Pianist (Chester Conklin): Know it? I wrote it!

Moe (Moe Howard): Quiet! You lost your voice.
Curly (Curly Howard): [looking on the floor] Where?