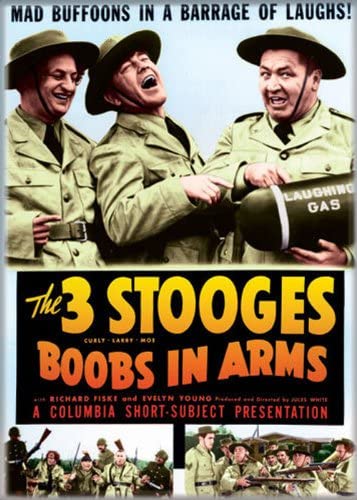 Set in wartime America (1940), Boobs in Arms the Three Stooges (Moe, Larry and Curly) as unsuccessful greeting card salesmen, who get into a fight with a large man (Richard Fiske) after accidentally bumping into him.  With a little bit of creativity, the Stooges succeed, and shortly later try to comfort a pretty young woman (Evelyn Young), who fears that her husband no longer loves her.  The Stooges agree to pretend to be paying attention toward her, in order to make her husband jealous.  The scheme works all too well, as the jealous husband comes home.  And it’s the man they fought with earlier!

The Stooges run for their lives, and run into what they think is a breadline.  Instead, it’s a registration office for the U.S. Army.  Sooner than expected, the Stooges are inducted into the Army. They meet their new drill sergeant — yes, the man that they were running away from.  Pity the drill instructor who has to try to make soldiers of the Three Stooges.  First come some shenanigans, including the Stooges “hiding” inside the swinging bags that the Army uses for bayonet practice! Then, the Three Stooges deploy to the battlefield. Where they are as lazy and incompetent as they were in civilian life.

Then, the enemy captures their sergeant. And the military comes up with a plan for rescue.  They entrust the Three Stooges with an artillery shell containing a new type of laughing gas.  The idea is that they will shell the Nazi captors with the laughing gas, and rescue the captured Allied soldiers.  The Three Stooges, however, end up shelling themselves with the laughing gas, and laughing themselves silly.  Laughing non-stop until the end of the film, the giggling Stooges still manage to rescue their sergeant and make a shambles of the Nazi headquarters.

Advertising Sign: Join the Army and see the world – or what’s left of it

The Sergeant (Richard Fiske): Now get this!  I’m going to make soldiers out of you, even if I kill you.  And I hope I do!

The Sergeant (Richard Fiske): What do you think you’re doing, playing hippity hop at the barber shop?

The Sergeant (Richard Fiske): [crying] Everything happens to ME!

Curly (Curly Howard): [to Moe, whom he has just pushed into a puddle] Hey! What’s the idea ‘a going’ swimmin’? We got woik ta do!