Home » Posts » No Census, No Feeling 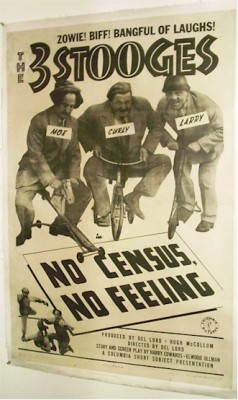 No Census, No Feeling begins with a storekeeper opening the awning over his store. Resulting in the sleeping Three Stooges falling out of the awning where they were sleeping. After a moment of slapstick fighting over whose fault it was, Curly throws a pot, breaking dishes … Resulting in the Stooges running away from the storekeeper and a pursuing police officer.  They run into a building for cover, and come out as agents for the census bureau, setting up the remainder of the short film where they try to gather answers for the census from private citizens. For the princely pay of 4 cents a head!

The Stooges soon separate, with a series of vignettes as they each unsuccessfully try to gather information for the Census in a series of funny moments, resulting with all three reunited at at a mansion, where Moe and Larry are talked into standing in for missing bridge players for the hostess.  Curly, meanwhile, is making punch in the kitchen – while trying to make time with the French maid – and “sweetens” the punch by adding Alum to it, thinking that it’s powdered sugar.  This leads to a very funny scene, as the different party members (including Three Stooges regular Vernon Dent) try to drink the punch, not hurt the hostess’ feelings, and keep talking with the puckering effect of the alum.

Census takers at the Football game

Soon the Three Stooges are sneaking into a large football game, trying to get the football players’ information for the census.  It’s a very funny segment, as the football players try to ignore them while the Stooges try to take the information.  This leads to Larry’s “genius” idea of getting the football, since they the players would have to talk to them!  This results in the final scene of the film, with Curly running with the football, with Moe and Larry close behind pulling an ice cream vendor’s cart, throwing ice cream at the pursuing football team and officials.

The stooges get jobs as census takers and wind up in a fancy mansion looking for people to survey. Moe and Larry are recruited to join a bridge game, while Curly adds Alum to the lemonade. The resulting concoction is consumed by everyone, resulting in puckered lips and shrunken clothes. The boys next try to take the census at a football stadium. They disguise themselves as players and wind up in the middle of the game. Curly runs off with the ball and all the other players in pursuit.

Funny movie quotes from No Census, No Feeling starring the Three Stooges

Moe (Moe Howard): Good morning, sir, I’m the census taker. Are you married or happy?
Henry’s wife: Hen-ry!
Moe (Moe Howard): [Henry ducks just a vase is thrown by his wife, hitting Moe and knocking him down the stairs] Married.

Lady having bridge party: Does your drink taste all right?
Moe (Moe Howard): A little heavy on the Angora Bitters. In fact, I think the goat walked right through it, I’m sure.

You fill up my census …

At the football game

Trivia for No Census, No Feeling

1 thought on “No Census, No Feeling”