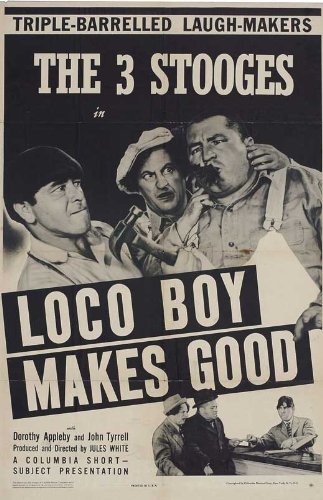 The Three Stooges short film Loco Boy Makes Good begins with Moe, Larry and Curly getting tossed out of a cheap hotel (one dollar a month) for being eight months behind on their rent.  Spying an article in the newspaper where they land, Moe gets the idea of having Curly fall on a cake of soap in the lobby of a hotel so they can sue for damages.

After a few false starts, they’re ready to start their scheme, when the sweet old proprietor is being threatened by her creditor, and the Stooges have a change of heart, vowing to help the old woman keep her hotel.

Fixing up the hotel

The Three Stooges are at their best trying to fix up the dilapidated hotel – I love how Moe cuts a board with Curly’s head.  And they put a lot of slapstick into a fairly short period of screen time.  Soon it’s time for the hotel’s grand re-opening, where the Stooges are appearing as “Nill, Null and Void”, comedians whose act falls rather flat and ends abruptly with Curly getting hit in the face by a tomato thrown by a drunken patron.  Curly storms off and goes to a dressing room to clean up, where a magician (played by Three Stooges regular Vernon Dent) is preparing to go on.

Next, Curly puts on his coat by mistake, and heads back out to mingle with the guests, dragged there by Moe and Larry.  Curly becomes a success with the audience – unintentionally.  As magic things keep happening thanks to his gimmick-laden coat, and he uses it to not only entertain the guests but to get his revenge on the drunken heckler as well.  It’s a very funny scene, the highlight of the short film, and worth watching.

Loco Boy Makes Good is available on DVD as part of The Three Stooges Collection volume 3 (1940-1942).

Curly (Curly Howard) Don’t you dare hit me in the head! You know I’m not normal!
Moe (Moe Howard): [does an eye poke instead]

Moe (Moe Howard): Hey, Did you notice the beautiful watch that Scroggins had on?
Curly (Curly Howard) Notice it? I got it!

Fixing up the hotel

Moe (Moe Howard): [to Curly, who’s holding a nail backward, with the head of the nail against the wall] Wait a minute, you dimwit! Don’t you know nothin’ about drivin’ nails? Are you that dumb? Do you see where that nail is pointin’? That nail is for the opposite wall.

Larry (Larry Fine): Moe, would it be possible for us to …
Moe (Moe Howard): I don’t think it would be possible.

Sign: [featuring the Three Stooges] Nill, Null and Void – three hams who lay their own eggs

Moe (Moe Howard): Good evening friends.  I would call you ladies and gentlemen, but you know what you are.

Moe (Moe Howard): We have a request …
Curly (Curly Howard) From the busboy …
Moe (Moe Howard): Yes.  To execute a song entitled “She was bred in old Kentucky, but she’s just a crumb up here.”

[Larry, as a waiter, is passing by, dinner order in hand]
Bearded nightclub patron: [to Larry as he passes by] Uh, pardon me. Do you have pate de fois gras?
Larry (Larry Fine): [Clearly confused] I’ll see if the band can play it.