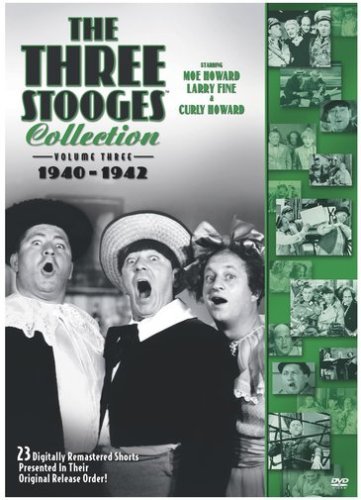 A wonderful collection of all of the Three Stooges short films from 1940 through 1942. Starring Moe Howard, Larry Fine, and Curly Howard

The Three Stooges in the first anti-Nazi parody. Moe plays the Dictator Hailstone, with help from Larry and Curly – can the beautiful spy Mata Herring stop them?

Rockin’ Thru the Rockies

The Three Stooges are inept trail guides. They try to get a troupe of female entertainers through the American wilderness … Until the girls are kidnapped by Indians!

The Three Stooges as inept plumbers. One of their funniest short films, with Curly trapping himself in a prison of pipes.

The Three Stooges are singing comedy waiters when Dr. Vernon Dent sends them to cheer up a child patient – and they head off to rescue the child’s kidnapped father

How High is Up?

From Nurse to Worse

The Stooges’ friend Jerry tries to get them to commit insurance fraud. They pretend that Curly thinks that he’s a dog … But Dr. Vernon Dent wants to operate!

The Stooges go from being on the run to census workers who “help” at a society party. It ends with them “infiltrating” a college football game!

The Three Stooges (Moe, Larry, Curly) go from inept fish vendors to inept beauty salon owners. And they ruin the hair of 4 beautiful señorirtas!  And then run for their lives!

The Three Stooges get hired to find an honest man. And they end up looking for him in prison, and try to paint their way out in a prison break!

The Three Stooges are photographers for Whack magazine (“If it’s a good picture it’s out of Whack”). But they mess up the assignment of taking photos of a movie star and his new bride. As “reward,” they are sent to the country of Vulgaria to get a photograph of the Vulgarians’ death ray. But the Stooges are caught and sentenced to the firing squad. For Curly’s last request? A giant cigar, in order to out-last the firing squad.

All the World’s a Stooge

All the World’s a Stooge – in order to escape the police the Three Stooges pose as child “refugees”. And drive their new family crazy!

A sequel to You Nazty Spy!, where the Three Stooges reprise their roles as Moe Hailstone, Dictator of Moronica and his “stooges”. Where they poke more fun at the Nazi party and the Axis powers in one of their best short films, a nonstop laugh fest that’s highly recommended

An Ache in Every Stake

The Three Stooges are inept ice deliverymen, who keep ruining Vernon Dent’s birthday cake. And that’s before his wife hires them as cook and butlers!

In the Sweet Pie and Pie

One of the Three Stooges best short films. Three lovely young ladies need to be married in order to collect their inheritance. So they marry three death row inmates (Moe, Larry and Curly – imprisoned for a crime they didn’t commit).  But the Stooges are released at the last moment, and their new brides are determined to find a cause for divorce, So the brides throw a large society party. This leads to one of the best pie fights ever filmed!

Some More of Samoa

Moe, Larry, and Curly abandon a scheme to defraud a hotel, once they realize the little old lady who owns it is in trouble. And after some disastrous remodeling, they try to entertain the guests and are failing …. Until Curly puts on magician Vernon Dent’s coat by mistake!

A Western short film starring the Three Stooges.  After a hilarious “morning routine”, the Stooges’ mother throws them out of the house to make their way in the world.  The Three Stooges decide to use Curly’s invention, a gold collar-button finder, to become prospectors, after being swindled into buying a worthless gold mine.  They actually succeed, only to have to hide from claim jumpers. This leads to a hilarious scene with the boys hiding in a ghost town hotel …. With Moe, Larry, Curly and a lit stick of dynamite!

The Stooges take their fake bull-fighting act to Mexico. But they irritate a jealous husband, who makes sure that Curly’s facing a live bull in the arena!

Set in ancient Rome, the Stooges are used chariot dealers who have to rescue a beautiful young maiden from Emperor Octavius Grabs!

Moe, Larry, and Curly are engaged to the three daughters of a prison warden who’s lost his job.  The Stooges break into the prison to get proof of the illegal shenanigans going on inside.

The Three Stooges find a foundling on their doorstep. They do their comic best to feed — and change — the baby, only to realize that the child’s been kidnapped!

The Three Stooges–political satirists? Laugh if you will, but as demonstrated by the shorts “You Nazty Spy” and “I’ll Never Heil Again“–both of which are featured on this two-disc, digitally remastered set–the boys were the first act in Hollywood to bring attention to the Nazi threat in the days prior to America’s involvement in World War II. “Nazty,” which was released in 1940 some nine months before Chaplin’s The Great Dictator, and 1941’s “Heil,” have Moe donning the greasepaint mustache to play Moe Hailstone, a dull-witted wallpaper hanger who runs amok as the dictator of Moronica along with his sidekicks Larry (the Goebbels stand-in) and Curly (Mussolini, natch).

If the hijinks aren’t exactly drawing room humor, one must still marvel at the foresight of the team and director Jules White for conceiving the idea, and by the sheer ballsiness of the Howard brothers and Fine–all Jews–taking the air out of the most insidious anti-Semitic figure of the period. One might also view 1940’s “Boobs in Arms,” with the boys accidentally joining the Army, as another riff on the absurdity of the slowly mounting war. Of course, the Stooges were better known for their wild slapstick comedy, and Volume 3 of this long-overdue collection presents some of the funniest shorts in their lengthy careers.

Chief among these is “What’s the Matador,” which pits the boys’ bullfighting routine against some real live beef, and the delirious “Sock-A-Bye Baby,” with the Stooges attempting to care for an abandoned child. Elsewhere, the two main themes of the shorts–the Stooges as agents of fair play, as seen in “Nutty But Nice” (Curly finds a kidnapped man by yodeling) and “So Long Mr. Chumps” (the boys free an unjustly jailed man)–or menaces to society, as shown by the devastation wreaked at a dinner party in “An Ache in Every Stake,” is in full effect. As with the two previous volumes, the shorts featured here (eight of which have never been available on DVD) are presented in chronological order and pristine condition, which soitenly makes up for decades of neglect from previous fly-by-night Stooge releases. –Paul Gaita