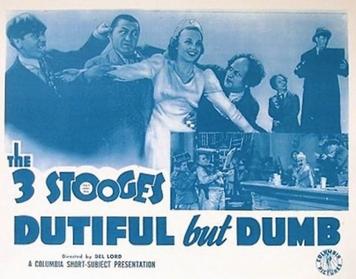 Synopsis of Dutiful but Dumb starring the Three Stooges

Working for Whack magazine, Moe Click, Larry Clack and Curly Cluck are three inept photographers.  After they mess up up an important assignment, their boss sends them to the small country of Vulgaria… To get a photograph of their new “invisible ray”.  If they’re caught, what’s the loss?  Soon, the Three Stooges are in Vulgaria, and promptly facing a firing squad! A. U. . This ends

Review of Dutiful but Dumb

Dutiful but Dumb is one of the Three Stooges classic short films; it begins with Moe Howard, Larry Fine and Curly Howard as “ace” photographers (Click, Clack and Cluck) for Whack magazine, a fictional photojournalism magazine, run by Three Stooges veteran Vernon Dent.  The Stooges are tasked with taking a photograph of a movie star on his honeymoon with his (newest) bride.  A very funny segment as they try using their telescoping camera in an inspired bit of prop comedy.  However, it’s Curly who manages to sneak into the honeymoon suite. He hides with his head on a platter, surprising the newlyweds when then pull the cover off their food long enough for him to take their photo and make his escape.

Unfortunately for them, Moe loses his temper with Curly in the darkroom (in an extended scene where Curly uses a clown’s logic to tell the time – a hilarious routine) and ruins the photograph.  In addition, there’s another bit of physical comedy when the Three Stooges burst into the boss’ office and knocks over a series of stands, similar to giant dominoes, hitting the boss over the head.  Vernon Dent is about to fire them, when the suggestion is made that every photographer that they’ve sent to Vulgaria to photograph the military’s new “death ray” has failed to come back.  But what do they have to lose by sending the Three Stooges there?

While they’re about to be executed, they get their last request – a final smoke – and Curly pulls out a cigar approximately three feet long! Eventually falling asleep, the boys are nearly executed before they make a temporary escape into an office, where the “death ray” is.  After Curly mistaking it for a camera and shooting off Moe and Larry’s pants, the commanding officer comes back in, and the boys hide.  With Curly hiding inside an old-time radio, eventually having to be a one-man band when they turn the radio on, and eventually giving himself away.

After a brief struggle, the Three Stooges manage to overcome, and steal their uniforms.  They begin marching out, and would have gotten away, except for the lure of a free meal.  The Stooges foolishly sit down to eat, leading to one of the Three Stooges most iconic scenes, with Curly trying to eat a bowl of oyster soup.  With the oyster fighting every inch of the way, eating Curly’s oyster crackers, spitting at Curly, biting his hand, etc.  It’s a classic scene that has to be seen to be appreciated.  The scene ends with Curly losing his temper, and firing a gun at the soup. This leads to total chaos and the Stooges being recaptured.  The short film ends with the Three Stooges being carried away on the tips of the guards’ bayonets.

Dutiful but Dumb is a very funny short film and is available on DVD as part of The Three Stooges Collection, Vol. 3: 1940-1942

Sign: Whack, The Illustrated Magazine – if it’s a good picture, it’s out of Whack

Bride: Darling!
Movie Star: Sweetheart!
Bride: Have you forgotten all your other wives?
Movie Star: Completely! Except on alimony day … but … This is Wednesday! [they kiss]

Sign: The Vulgarian Frontier – Subject to change without notice

Moe Click (Moe Howard): [as the Three Stooges are about to be executed by firing squad] Wait a minute! This ain’t according to rule 27 of international law!
Larry Clack (Larry Fine): We’re supposed to have a last request!
Curly Cluck (Curly Howard): Yeah, this is request night!
Vulgarian Soldier (Bud Jamison):: What do you request?
Moe Click (Moe Howard): How about a last smoke?
Vulgarian Soldier (Bud Jamison):: Okay, but when the smoke is finished, so are you!
[Curly pulls out a 3 foot long cigar and begins smoking]