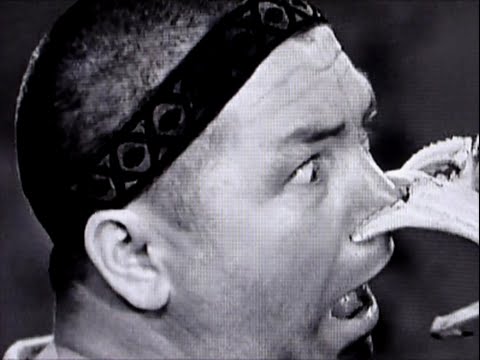 The Three Stooges short film Matri-phony is set in ancient Rome, where the Three Stooges (Moe Howard, Larry Fine, Curly Howard) are makers of pottery — “the biggest chiselers in Rome” — and are doing what they do best: slapstick. The short film begins with Moe and Larry playing Tic Tac Toe — which Curly wins! This shortly turns into a slapstick clay fight, that ends with a large glob of clay in Larry’s ear — which Curly solves by blowing into Larry’s other ear, propelling it into Moe’s face.

Soon, the main conflict of the short film is introduced — Emperor Octopus Grabus (played by Vernon Dent, without his mustache and wearing glasses since he’s supposed to be near-sighted) is looking for yet another new bride, and one of his Roman soldiers is pasting a royal proclamation on the side of their building, to the effect that all red-headed women between the ages of 18 and 22 are to report to the Emperor.

Not wanting that covering his business’ wall, Moe begins tearing it off — until he realizes that a Roman soldier is watching. He quickly puts it back up, smacking Curly in the face with paste in the process — Curly likes the taste — and ends up papering Curly to the wall as well.  In the meantime, a beautiful young girl (Marjorie Deanne) has fled to their shop, looking for a place to hide, and finding it from the soft-hearted Stooges.

Soon, a Roman soldier comes to the shop looking for her, and after some banter with Curly, he finds her — and takes the Three Stooges as well to face the wrath of the near-sighted emperor.

In a funny bit, Larry doesn’t feel the soldier’s spear in his back, and backs away … until he does, and marches back into line. A moment later, Curly does the same — there’s no soldier behind him — and backs into a cactus leaf, and thinks that it’s a soldier’s spear and marches back into line; Curly eventually figures it out and takes the cactus leaf, and drops it on Moe’s foot – pointy end down. 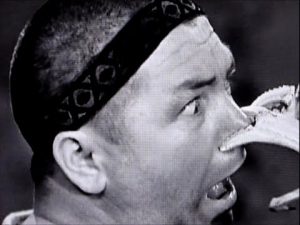 The Stooges try to flee — following the girl’s example — and do the “knocked out guard as puppet” routine, eventually fleeing into the girl’s room, where Curly sees a buffet, and sees a crab — “Ooh, a tarantula!” and has a battle of wits with the crab, only to lose.

Moe then has the idea to disguise Curly as a girl, and break the emperor’s glasses, giving the girl time to escape. Curly makes a homely woman, but apparently Emperor Octopus is literally blind as a bat without his glasses, and is fooled. A funny bit follows with food tasting for the Emperor, Curly’s crab pinching the emperor — and the emperor thinking it’s an affectionate Curly — and a slapstick escape, where the jump out the window, only to end up on the spears of three passing Roman guards, ending the short film.

Curlycue: [to Roman soldier at their pottery store] Can I interest you in a new mug?

Guard at Pottery Shop: Hey, what’s behind those drapes?
Curleycue: The back of the drapes!

Curlycue: They always pay their income tax on time – they don’t have a cent in the world!