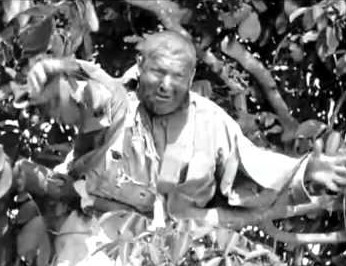 In The Sitter Downers, Moe, Larry and Curly are three bachelors, who are dating three sisters (Corabell, Florabell and Doorbell) – the short film begins with them leaving the flower shop with flowers for their girls – and their dog is carrying a rose in his teeth for his canine girlfriend as well.  They leave to get ‘the car’ – a funny bit where the audience first thinks that the Stooges are driving out of the garage in a normal car, but quickly realize that’s not the case as Moe comes out driving a scooter, towing Larry, Curly and the dog in a series of small wagons, hitched together like a train.

Moe weaves through the streets in order to end up at their girls’ house.  Once there, they do their classic routine of dusting off each other’s back – with Curly slapping Moe in the face when he turns around! Soon, the Three Stooges propose (for the hundredth time) to their girls, who insist that their father, Mr. Bell, grant his permission first.  Mr. Bell will not hear of it, however, leading the Three Stooges instituting a sit-down strike (a rather hot topic back in 1937) – vowing to sit in Mr. Bell’s living room until he consents.

Over the next three weeks, the Stooges become a minor newspaper sensation, resulting in fan mail offering them various things.  Including a free lot and prefabricated house for them to move into after their honeymoon.  After some slapstick dealing with the boys ‘roughing it’ in the Bell living room (including Curly fishing in the goldfish bowl), Mr. Bell finally relents.  And the Three Stooges are free to marry their sweethearts.  Once they decide which Stooge will marry which daughter by drawing names out of a hat!

Soon, the newlywed Stooges and their brides arrive at the site of their new house – which the Three Stooges have to assemble for themselves.  The wives insist that the Stooges start building their love nest immediately, although the Three Stooges want to go on their honeymoon first.  The wives lay down the law, and knock their newlywed husbands down.  After a short-lived attempt at striking again, the wives have their husbands beaten into submission, and they’re trying their (inept) hands at building the house.  If Curly hadn’t destroyed the plans, things might have turned out better — but probably not.

The Three Stooges manic slapstick comes fast and frequent, as Moe chases Larry through the cement that Curly’s trying to pour … and then does it again.  In a very funny moment, Moe gets his finger stuck in a water pipe, and Larry takes advantage of it to get a rare moment of revenge on Moe, kicking him and breaking a lumber board over him.  Until Moe gets free, and chases him again, leading the wives to chase them both … towards Curly’s carefully repaired cement.  Rather than letting them trample it again, Curly does it first – only to watch everyone else run around the cement!

A related cement accident has Curly have his feet stuck in cement, causing Moe to do the obvious to free him – blow it up with dynamite!  This results in Curly getting blown into a tree, falling down and knocking out one of the girls.  Despite their best efforts, the Three Stooges eventually complete the house, which looks like a fun house at a carnival, with a sideways door, bathtub mounted on the wall, and stairs coming out of the walls – ‘those aren’t stairs, those are shelves’ – but it all comes tumbling down when one of the wives pushes a pillar that’s ‘out of place,’ ending the short film.

Moe (Moe Howard): For the hundredth time,
Moe, Larry, Curly in unison: Will you marry us?
Corabell: This is so unexpected!

Mr. Bell: I’ll have you thrown out of this house!
Moe (Moe Howard): Is that so? [pushes Curly towards him] Tell him a few syllables!
Curly (Curly Howard): You can’t do that to us, we ain’t interfering with interstate commerce! And we’re gonna sit right here! [sits down on yarn needles]

[Curly is fishing in goldfish bowl]
Moe (Moe Howard): Didn’t I tell you not to fish for those pets?
Curly (Curly Howard): But I had two strikes!
Moe (Moe Howard): Here’s third! [breaks the fishing pole over Curly’s head]

[the Three Stooges pick names out of a hat, to determine who gets to marry which girl]
Larry (Larry Fine): I got Florabell!
Florabelle: Darling!
Moe (Moe Howard): I got Corabell!
Corabelle: Oh, Darling!
Curly (Curly Howard): I got Stetson! What one is she?

Florabell: I’ll bring ’em down! [hits the ramshackle frame with a board so it collapses and the Three Stooges fall down to Earth]

Moe (Moe Howard): You’ve got nothin’ to worry about.  Besides, dynamite always blows down.
Curly (Curly Howard): I didn’t know that.