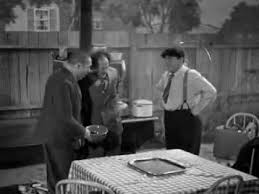 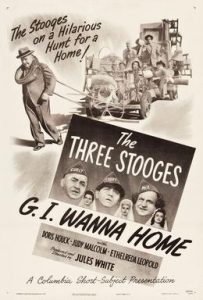 After the end of World War II, the Three Stooges (Moe, Larry, and Curly) are discharged from the Army. They’re eager to get home to their sweethearts since they plan to be married that same evening. After getting splashed by mud several times, they take a taxi to their home “on Meshugenah Avenue” — where bad news is waiting for them.

Their fiancees — Bessie, Tessie, and Jessie — are waiting faithfully for them; but outside the house with all of their furniture. They’ve been dispossessed, and can’t get married until they’ve found a place to live. Curly pulls the vehicle with all of their belongings and the others like a workhorse. “If I’m gonna work like a horse, I’m gonna eat like one!” A montage of rejections follows (including a short but funny bit with Symona Boniface).

Having sent the girls home to their families, the Stooges finally find a solution — or so they think. They’ve unpacked their belongings into a vacant lot as their new “home” and wired for the girls. In the meantime, they do some house cleaning, leading to some of the best bits in the short movie. Curly cleans the “carpet” by mowing it, and then vacuuming. But, they have to get supper ready!

While Curly “peels” potatoes by shaving them, Larry climbs a tree to steal some eggs from a nest, dropping them on Moe. Larry completes his task by literally “dropping in” on Moe — all the time the vacuum cleaner keeps running, and the bag gets bigger and bigger and finally explodes. At Larry’s suggestion, Moe decides to kill the neighbor’s chicken in their tree for roast chicken. While Moe and Larry fight over the shotgun, Curly tries to not get shot. The rifle goes off, and they accidentally kill a goose — dinner!

After some shenanigans, supper is ready — and unknown to the Stooges, their pet parrot has walked inside the bird, leading to the normal routine when they try and carve the bird. Their dinner is interrupted by a farmer on a tractor, who destroys some of their furniture and chases the Three Stooges.

In the next scene, the Stooges are married and  bringing their brides to their new home. It’s a small home — very small — that the Stooges have made, with two rooms. One is the bedroom, with two triple-decker bunk beds. Curly climbs on the top bunk with the expected results. collapsing the beds onto Moe and Curly, and ending the short film.

G.I. Wanna Home is one of the Three Stooges weaker efforts, and the effects of Curly’s strokes are becoming more obvious, sadly.

Moe: Carve that goose.
Curly: I can’t! Our goose ain’t cooked!
Moe: Give me a gander at that goose.