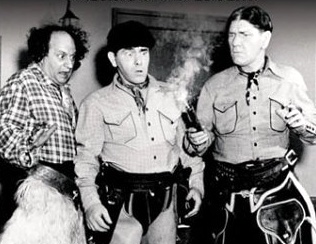 A remake of The Curly Howard-era short film, Phony Express. Set in the American Old West, the Three Stooges are mistaken for lawmen, and manage to actually capture a gang of crooks. Moe Howard, Larry Fine and Shemp Howard are then given the assignment of guarding money in an old house, reputed to be haunted by the ghost of an Indian Chief. The crooks escape (jailer played by Emil Sitka), and use sheets to disguise themselves as ghosts in order to scare off the Stooges. Shemp, however, turns the table on them by disguising himself as the Indian Chief.

Shemp: Hey Moe, I don’t like this.
Larry: Yeah. Suppose that old chief comes back looking for his head.
Moe: Cut it out. That spook stuff is all a lot of foolishness. What’s the matter, you scared?
Larry: No, just apprehensive.
Moe: Oh. [Moe flinches] That’s a mighty fancy word. What does that “apprehensive” mean?
Larry: It means you’re scared, with a college education.
Moe: Oh. You’re pretty smart.
Larry: Oh, yeah.
Moe: [holds out his hand] What’s that?
Larry: That’s a hand.
Moe: [balls his hand into a fist] Good. What’s that?
Larry: That’s a fist.
[Moe punches Shemp in the eye]
Moe: What was that?
Larry: A punch in the eye.
Moe: Right.
[Moe punches Larry in the eye]