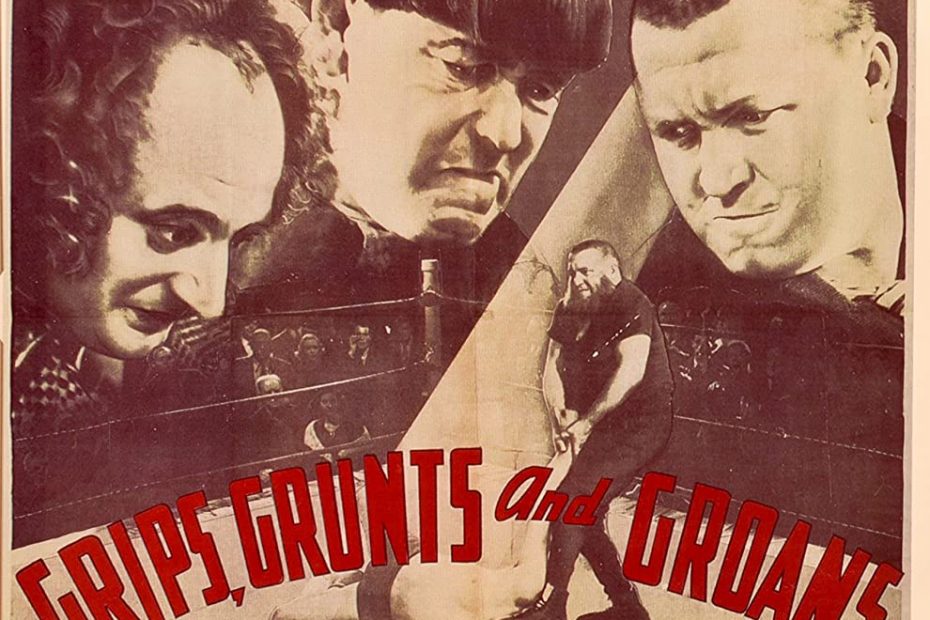 In Grips, Grunts and Groans, the Three Stooges (Moe Howard, Larry Fine and Curly Howard) are hobos, traveling by rail – until the railway guards find them, that is.  Narrowly escaping

At the ring … with a ringer

It almost succeeds, too, until Curly accidentally drops a series of dumbbells on Bustoff – and then the cabinet.  The gamblers make it very clear that the Stooges’ health is on the line is Bustoff doesn’t win his match, and so Moe decides to disguise Curly to appear in Bustoff’s stead.  The wrestling match is very funny, with Curly misunderstanding what it means to ‘pin’ the opponent’s shoulders, and tries to use a real pin (borrowed from a ringside woman’s hat), and later on poking his opponent with the pin — and accidentally poking himself as well.

However, Curly is getting creamed, until Moe sees a lady with a bottle of perfume – the same perfume (Hyacinth) that drove Curly crazy earlier in the restaurant.  After Moe sprinkles him with the perfume, Curly goes wild and (with very funny slapstick with the poor wrestler) pins his opponent, and starts throwing everybody out of the ring – his opponent, the referee, Moe, Larry, and ringside police officers.  A very funny film, (a reworking of an earlier short film, Punch Drunks) and recommended viewing.  Grips, Grunts and Groans is available on The Three Stooges Collection Volume 2 (1937-1939).

Curly (Curly Howard): [Moe and Larry are punching, kicking and choking Curly to get him to agree to spar with Kid Pinkie for $5] Wait a minute! Wait a minute! If I’m gonna get beat up, I wanna get paid for it!

Waiter: Will you gentlemen have dessert?
Moe, Larry and Curly: Yeah, another turkey!

Tony: Bustov has the biggest fight of his life today, and you’re here gettin’ him stewed!
Curly (Curly Howard): Yeah, but he’s payin’ for it!

Trivia for Grips, Grunts and Groans