Home » Posts » Tassels in the Air, starring the Three Stooges

Tassels in the Air, starring the Three Stooges 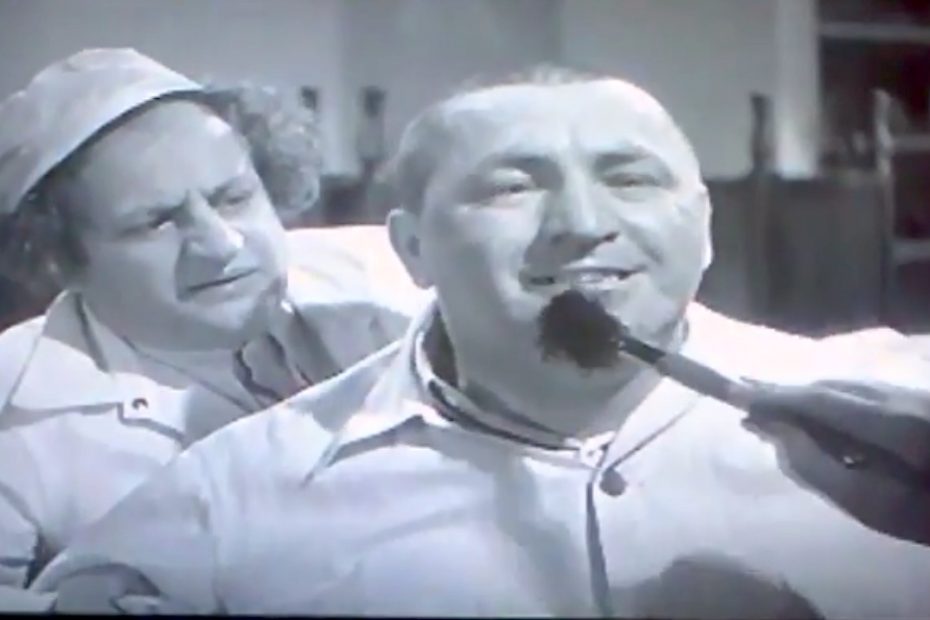 Synopsis of Tassels in the Air

The Three Stooges are janitors in an office building who stencil the wrong names on all the offices, causing a rich lady to mistakes Moe for “Omay”, a famous decorator. She hires the boys to redecorate her house, which they quickly start destroying. The fact that Curly goes crazy at the sight of tassels doesn’t help, and then the real Omay shows up!

review of Tassels in the Air

Tassels in the Air is a very funny Three Stooges short film, and a long-time favorite.  It begins with a rich woman, Mrs. Smirch (played by Symona Boniface), wanting to hire the “famous” decorator, Omay, to redecorate their home.  Her husband (Three Stooges regular Bud Jamison, who shines in his role) complains that they’re putting on airs, since he used to be a mailman before inheriting his fortune.  Undeterred, she calls Omay and goes to visit him at his office.  In that same office building we find the Three Stooges (Moe, Larry, and Curly) working as maintenance men under the supervision of building supervisor Vernon Dent.

They’re painting the hall, with several very funny incidental bits, such as Larry and Curly playing a game of checkers on the checkered floor, using paint buckets as checkers; Moe, intending to break the game up kicks one of the “empty” buckets and hurts his foot in the process.  The major point of this, however, is when Moe confuses left from right and paints the names of the different offices on the wrong side of the hall so that when Mrs. Smirch arrives she walks in on the Stooges … Just as Moe is trying to explain the concept of Pig Latin to Curly, using his name as an example: Moe becomes “Oe-may”.  Mrs. Smirch proceeds to hire the wrong “Omay” to repaint her house, which is just as well since Vernon Dent fires them goofing up the paint job.

The Three Stooges begin painting the Smirch mansion, which leads to a running joke — Mr. Smirch wants to help, so Moe tells him to go mix some spotted paint … And we intermittently see the valiant Mr. Smirch attempting to do that with a colander, studying a Dalmatian, etc.  The Stooges, meanwhile, proceed to paint over a table owned by King Louis the sixteenth, leading to a funny bit where they do a “round robin” of painting mistakes, leading to Curly wanting to hurt Larry.  Before that happens, Mrs. Smirch arrives and introduces her “friend” Mrs. Pendle, who recommended Omay in the first place.  It turns out that Omay is paying a ‘commission’ to Mrs. Pendle for influencing her rich friends to hire him, and the Stooges become wise to this, and plan on getting even with three buckets of paint, which end up on the wrong people (guess who?)

Tassels in the Air is one of my favorite Three Stooges short films, and I hope you enjoy it as well.  It’s available on DVD as part of The Three Stooges Collection volume 2.

Funny movie quotes from Tassels in the Air, starring the Three Stooges

Omay: How is it possible to make so much noise painting?
Moe (Moe Howard): You don’t know us guys – we make noise stuffing a mattress.

Butler: Gentlemen, you’re not going to paint that table!
Curly (Curly Howard): Why, soitenly!
Butler: But you can’t do that! It’s a rare antique!
Moe (Moe Howard): What, that old thing?
Butler: It belonged to Louis the Sixteenth!
Larry (Larry Fine): Oh, second hand, eh?

Mrs. Smirch: Omay, I’d like you to meet Mrs. Pendle.  She’s the one who said your work is very recherche.
Moe (Moe Howard): Oh, anybody’s liable to make a mistake.

Trivia for Tassels in the Air