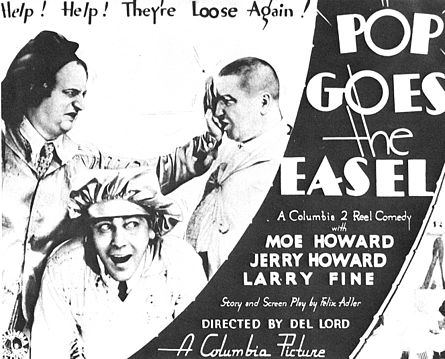 Pop Goes the Easel is a fast-paced, very funny Three Stooges short film. The film, released in 1935 during the midst of the Great Depression, reflects the hardship in finding a job by having the inept Stooges trying to find work, and failing in various funny ways.  The movie follows each of the trio as each tries to get a job, and fails — one of my favorite moments occurs when they reunite, and Moe asks Curly to spell “chrysanthemum,” since Moe has just failed to get a job based on his inability to spell it — which Curly proceeds to spell correctly, making Moe angrier!

Moe then decides that they should each grab a broom from in front of a storekeeper’s shop, and start sweeping the sidewalk in hopes of impressing the storekeeper and getting a job.  Instead, the storekeeper thinks that they’re trying to steal his brooms, and calls for the police, leading into a chase of the Three Stooges that leads into the second half of the short film.

Three Stooges hide out at the art school

The Stooges duck into a nearby building for cover, where they walk into an art school — and to throw the pursuing detective off their trail, dress the part and start acting like art students.  The mayhem builds quickly, ending with a large fight with the sculptor’s clay, not unlike the pie fights that they became famous for.  The short ends when everyone realizes that the Three Stooges were the instigators of the chaos, and the other students start beating them up.

Hiding out at the Art School

Detective: Oh, pardon me, you’re French.
Moe (Moe Howard): [with Irish accent] By golly, that’s what I am.

Trivia for Pop Goes the Weasel