Home » Posts » Ants in the Pantry

Ants in the Pantry 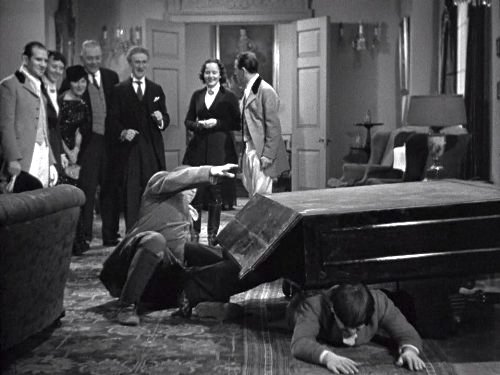 In Ants in the Pantry, the Three Stooges (Moe, Larry and Curly) are inept pest exterminators who are about to lose their jobs – until their boss “suggests” that they start infesting the houses they visit with vermin, so that they can then exterminate them!   It seems to work at the first mansion they try, with the lady of the house having them dress up in fox hunting clothes, so as to blend in with the other guests at the party she’s throwing.

Soon the Stooges are trying to get rid of the pests that they’ve brought in, including Larry throwing a sackful of cats into a piano (to get rid of the mice there), only to have Curly try to remove them — without drawing attention to himself, of course!  The party is a disaster. The lady of the house prepares to throw the Three Stooges out. Until her guests congratulate her on the funny “entertainment” that she hired!
All is forgiven. She even invites the Stooges along on the fox hunt.  Curly, however, suffers from a cold. He doesn’t realize that the “fox” that he’s found is, in fact, a skunk! Whose stench knocks out Moe and Larry — and a horse as well!

Ants in the Pantry is available on DVD as part of The Three Stooges Collection, Vol. 1: 1934-1936, and is highly recommended.

Moe Howard relates the following story about the filming of Ants in the Pantry in his autobiography, Moe Howard and the Three Stooges:

“There was a scene where we were having trouble selling our services, so we complain to our boss, who tells us, ‘If they don’t have any bugs, give them some.’ We got the idea and went from house to house throwing moths in with minks, mice on the floor, and ants in the pantry. During the shooting, I hadn’t noticed that a small container of red ants had broken apart in my pocket and the little devils were crawling down my back, in my hair, and into my pants. It was insane. All through the scene I was scratching and squirming and slapping myself on the neck and face and on the seat of my pants. Elated, director Preston Black shouted, ‘Great Moe. Keep up that squirming!’ It was very funny – to everyone but me.”

Funny movie quotes for the Three Stooges short film, Ants in the Pantry

Curly (Curly Howard): [hiding behind a wire frame garbage can] How’d he see us?
Moe (Moe Howard): Must’ve been the garlic you ate last night.

Curly (Curly Howard): Thanks for the dance, or whatever you might call it?

Girl: What’s the matter?
Curly (Curly Howard): [being pulled out of his chair by Larry, sight unseen] Can’t you see that I’m falling for you?

Moe (Moe Howard): [trying to wrap a chain around Curly’s waist as an impromptu belt] If you didn’t have TB, I could get this around you.
Curly (Curly Howard): What do you mean, TB?
Moe (Moe Howard): Two bellies.

Trivia for Ants in the Pantry